What comparisons can be drawn between the Madinat-al-Zahra and Alhambra palace complexes in their relationships between architecture, garden, and landscape? Antonia Schreier (‘16) received a Senior Travel and Research Grant to investigate their differing impacts on the Iberian Peninsula. Antonia recently wrote to us about her experience:

Islamic architecture reflects a deep interest in nature expressed through the use of gardens to accentuate and enhance the experience of the buildings that it surrounds. The Iberian Peninsula is rife with examples of this rich relationship; the Madinat al-Zahra palace-city outside of Cordoba and the Alhambra palace grounds in Granada demonstrate at great lengths a reverence of structured nature. In order to thoroughly examine the way in which architecture, organized gardens, and the greater landscape interact at both sites it was necessary that I experience and photograph them first hand. With generous Nanovic Institute funding, I was able to perform a visual analysis and documentation on site which has proven critical to the development of my final argument regarding the sensitivity to and appreciation for the natural world demonstrated by these two monumental structures.

The interrelationship between architecture, gardens and landscape in secular Islamic architecture has been studied closely by art historian Fairchild Ruggles who notes that “the skillful manipulation of topographical elevation and vision that took place in al-Andalus began at Madinat al-Zahra and was developed further at Monteagudo, Malaga, Almeria, and the Alhambra. Architecture, garden and landscape were united by the mirador so that they gave structure to the relationship between nature and humankind….Although the meanings of the landscape and the way it was perceived changed considerably from the time of the Umayyads and Madinat al-Zahra to the time of the Nasrids and the Alhambra, the formal typology of the garden became a fixed element in royal palatine architecture, an indispensable aspect of the language of luxury and prestige.”[1] With my own research I hope to gain a better understanding of how Islamic architectural features including open doorways and windows that look out onto enclosed gardens and grand vistas demonstrate a deep interest in and respect for the natural world. Additionally, there is a great comparison to be drawn between the two palace structures in their present day degree of control over landscaping. 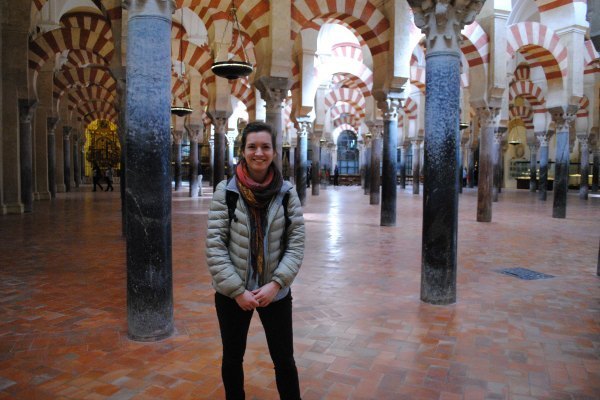 I divided my week in Spain in half, spending the first portion in Cordoba exploring Madinat-al-Zahra and visiting other influential sites including the Great Mosque of Cordoba and the Synagogue of Cordoba. I followed that with a train ride to Granada to spend two days there exploring the Alhambra, viewing it from both the site itself and across the valley in order to engage with the complex from as many vantage points as possible. I was most overwhelmed by the scale of both sites; on the one hand, Madinat-al-Zahra was a more manageable size than I had anticipated as art historians assess that only 10% of the complex has been unearthed. In comparison, the Alhambra complex was much larger than I had realized while studying it from articles and books. This revelation seems simple, but it was one that could only result from visiting the site in person. Building plans can reveal only so much about how it feels to be at a site. I was also able to perceive the orientation of buildings in relation to one another in a more nuanced manner, as well as appreciate the views out of intentionally placed doorframes and windows that imbue both palace structures with a great sense of superiority. 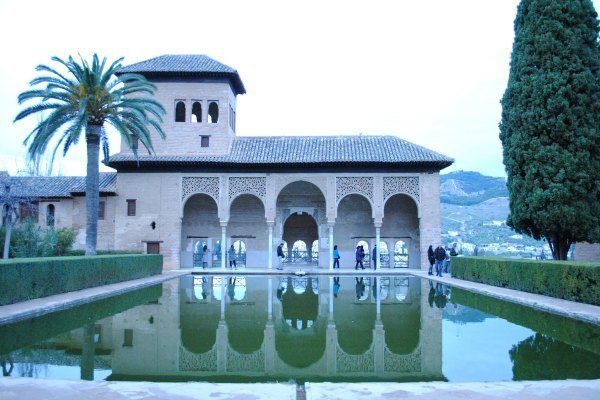 My visits to Madinat-al-Zahra and the Alhambra posed as many questions as they answered. The topography of each region became incredibly clear and I gained a crucial understanding of the spatial relationships between buildings at each complex. However, due to my focus on gardens and landscaping I was interested to see how each site differed in its approach to recreating the gardens that would have once flourished on their grounds. Madinat-al-Zahra has only recently been excavated, as it was rediscovered and unearthed in 1911 and although palm trees still stand and punctuate the vistas, the gardens have not been redeveloped. In contrast, the gardens of the Alhambra are impeccably groomed and play a large role in how the space is navigated, close to how it would have originally been experienced. However, this poses the question of how modern day art historians and landscape artists determine how the gardens should be landscaped and if any artistic license should be allowed. Water plays a similar role in this arena; there were large fountains and pools at both palace structures, however only those at the Alhambra have been restored. This audial component is vital to the experience, and a comparison of the two sites reveals how deeply lacking Madinat-al-Zahra is in its silence.

As I tie together my undergraduate studies in Art History, I have come to gain a great appreciation for the need to perform on site research. The realm of independent research is vast, and one to which I hope to contribute to in the future with a Master’s or PhD in Art History. This field allows for the study of the human condition in an expressive and emotive manner that will continue to attract me after graduation this spring, and having performed this research puts me in the position to consider applying to competitive programs in further education. I am incredibly grateful to the Nanovic Institute for providing me with this opportunity to put independent research skills into practice in an international setting, an experience which has deepened my sense of self sufficiency and confidence in my ability to plan and execute a lengthy research project.

[1] Ruggles, D. Fairchild. "The Gardens of the Alhambra and the Concept of the Garden in Islamic Spain." Al-Andalus: The Art of Islamic Spain. New York: Metropolitan Museum of Art, 1992. 163-71. Print.