The thirteenth-century Low Countries saw many new religious communities. Anna de Bakker, a graduate student in the Medieval Institute, received a Graduate Break Travel and Research Grant to travel to Belgium over spring break to consider what these communities sang. Anna recently wrote to us about her experience:

The area that is now Belgium saw a religious awakening in the thirteenth century, particularly among women--much of it supported by the Cistercian order. Contemporary accounts, avidly written and read by Cistercian monks, record the lives of some of these religious women, who were honoured as saints in their own lifetimes. Others took to writing themselves, producing some of the earliest literature in the Dutch language. For many, however, this religious revival took the form of an increased interest in religious life in community, whether in monastic houses or in more informal lay communities--both of which saw huge increases in numbers throughout the thirteenth century. One figure in the midst of these religious developments is Beatrice, the first prioress of a community at Nazareth near Lier. Her community, like others of its time, was founded through the interest of lay people and only later became part of the Cistercian order.  Beatrice’s biography and her own writings both survive, and have been studied extensively. But the St-Bernardus library in Bornem, Belgium, has another book central to Beatrice’s life: a book for daily monastic services (an antiphoner) copied in her own lifetime and used by the community at Nazareth for generations. In my research travel, I traveled to Bornem to study this manuscript, in order to answer the question: what music did these religious women of thirteenth century Belgium sing? What sort of liturgy did they follow, and were their practices determined by the Cistercian order or represent a more idiosyncratic practice?

My research in this area falls at the convergence of religious history and music history. Musicologists have written very little on the chant of thirteenth-century Cistercians, instead focusing their attentions on questions regarding the order’s origins. Meanwhile, studies of the new religious communities of the thirteenth century have made use of evidence ranging from legal statements to documents of land holdings to supplement what emerges from hagiographies, but are silent on liturgy and singing. As a result, there is no comprehensive understanding of what nuns like Beatrice practiced on a daily basis, namely their singing together in community. 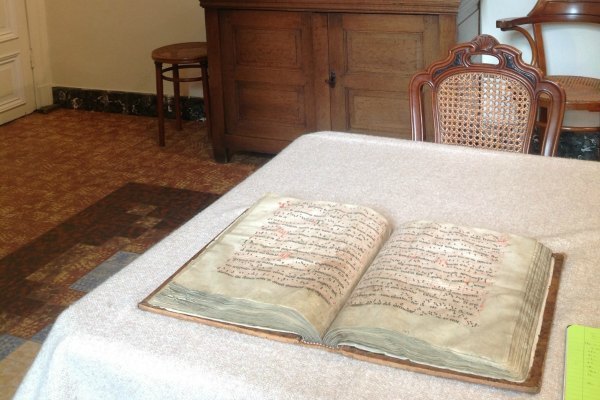 My research in Brussels bore fruit in several ways. First, consulting the hand-written internal-use catalog of the library at Bornem meant I found a second antiphoner, apparently produced for a different female Cistercian community near Gent. Second, I was able to photograph both of these manuscripts for my personal use, in addition to spending several days with them on-site. Finally, I was able to pursue a reference I found while examining one of the manuscripts: a chant added to the inside cover some time later in the history of its usage, which matched a chant in a manuscript now in Brussels. I spent my last day inspecting the latter manuscript at the Royal Library in Brussels, and was able to determine that it, too, is a manuscript for Cistercian nuns, although it is not described as such in the library’s catalog.

One result of my travel was the finding of just how much more there remains to be done: I was only expecting to consult one manuscript, but in the course of only a week found two others hiding in plain sight. This suggests there is much more to be uncovered about the practices of Cistercian women in this region. The manuscripts in Bornem matched each other fairly closely: evidently, the women of Beatrice’s convent took their Cistercian affiliation quite seriously indeed, and made sure to adhere strictly to their tradition in their daily practices. But the manuscript now in Brussels suggests this orthodoxy was not constant across the region, or static over time: this manuscript has had many changes applied to it, and occasionally seems to diverge from Cistercian tradition altogether.

The research I was able to conduct in Belgium over spring break will be crucial to my dissertation as it develops. I now have not one, but two extensive sources of chant to use as a point of reference as I examine Cistercian chant across the region. I can thus begin to separate the influences of the monastic order, regional developments, and the practices of individual houses as I work out the daily liturgy of communities in the Low Countries. I have much information to sort through in the coming months, thanks to my Nanovic-supported travel, and my research is stronger as a result.