Alexandra Tatarian, a senior Science-Business major on the pre-medical track with a minor in Science, Technology, and Values, is passionate about pursuing her interests in the medical humanities. She visited Greece over the winter break with  Institute support to conduct an independent research project entitled "Greek Dealings with Death and the Potential Clinical Application." Alexandra proposed to evaluate the language and culture of end-of-life care in Greece in order to advance a broader her study linking poetry and medicine. Having previously evaluated how elements of poetic language might be applied in clinical settings in Ireland, Alexandra's trip to Greece confirmed the viability of her interdisciplinary study and led her to make connections with professionals across national borders and traditions who have similar interests. 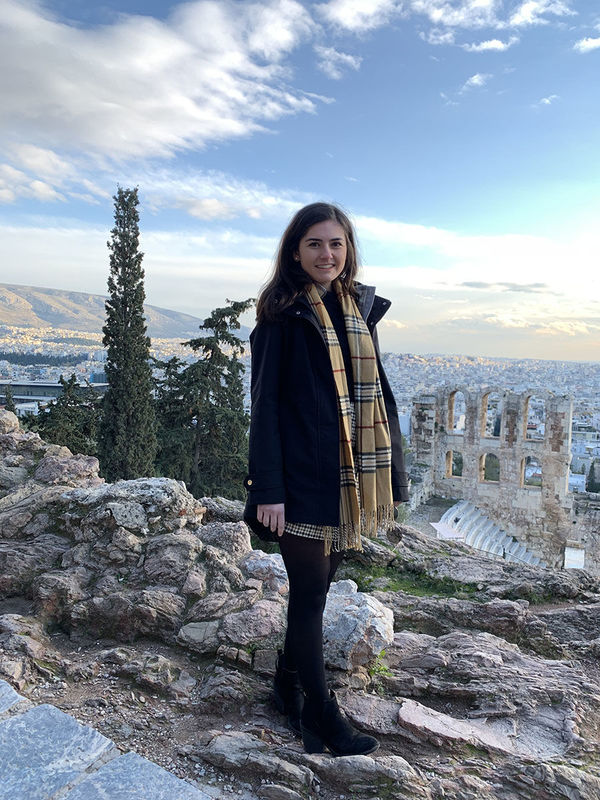 "I previously traveled to Ireland where I met Dr. Iggy McGovern, a poet-physicist. When I went on to read  about Irish death rituals in My Father’s Wake by Kevin Toolis, I was drawn into considering the comfort displayed in dealing with death through keening, or open grieving, as well as the close ties to similar traditions in Greece.

After reading My Father’s Wake, I wanted to learn more about death rituals in the East and how they might inform a greater comfort in conversing about death and dying in the West, where the language is often sterile and discomfort exists in discussing these difficult topics with patients and family. Toolis's book, which teaches “how the Irish live and die,” frequently makes reference to Greek traditions of public sorrow. I felt the need to explore this more closely as well as how Greece engages with death in the modern-day

Travel to Greece also made sense from a language and health perspective because many medical terms are of Greek origin and Hippocrates, a Greek physician, is considered the father of medicine. I was further intrigued by preliminary research that stated that Greek doctors are typically uncomfortable and occasionally dishonest in sharing terminal prognoses with patients. I became determined to explore this contrast in behavior before and after death in Greece by planning to visit a hospice and cemetery. My learning would continue at churches, museums, and during meetings with Theodoros Chiotis, a poet and literary theorist who has studied language used to cope with crisis, and Dr. Alexandra Halkias, a professor in Athens involved in the medical humanities.

This trip was also aimed at preparing me for the MSc in Health Communications I am pursuing through Fulbright and strengthening my submission for the Hippocrates Prize for Poetry and Medicine.

My overarching objective was to make a positive impact on healthcare by bridging the language gap between physicians and patients during end-of-life clinical conversations. But first I had to understand the most effective ways to manage that kind of crisis and the cultural conditions that make effective communication possible.

Dr. Aliki, one of my mentors in this project, explained the use of relativism in illness advancement to help patients conceptualize the future by reflecting on previous and current levels of pain. These reflections often use figurative or poetic principles such as metaphor and contrast. This led me to believe that exemplary palliative clinical communication may already be poetic in nature.

From there I sought out more concrete examples of poetic elements at work. I found that the performative aspect of poetry ties well into the clinical speech, since it matters not just what is said, but how it is said. Pauses and line breaks may be crucial silences for a patient to process information. Further, short and long lines in poetry can be equated to a physician knowing when to say less or more depending on how the patient is responding. Additionally, rhythm and intonation contribute to the effective delivery and reception of news.

In 2010, Dr. Aliki initiated Galilee, the country’s first and only hospice care center, and described the process as trying to create a highway without any roads. She has been spreading palliative care in Greece through an educational program and working with the National and Kapodistrian School of Medicine to incorporate end-of-life communication lessons into the curriculum.

This theme of pioneering was also apparent in my conversation with Theo Chiotis. He is a scholar who believes poetry is a powerful tool that can be used to cope with crisis, because he did just that through an anthology in response to the financial crisis in Greece. Upon learning about my desire to use poetry for dealing with death in the clinical setting, he supported my drive to bring poetry into the medical field, but also stated that it is up to me to carve out and define that space for poetry.

Chiotis and Halkias were instrumental in providing direction for my research.

Chiotis shared an extensive reading list and pushed me to be creative and get to know my audience. Halkias suggested I start developing paper that could be published, in order to collect my thoughts and help establish a network of people who have similar studies. She suggested building a bridge between doctors and patients in clinical dialogues by evaluating potential poetic language from both the patient and physician perspectives. This would allow me to determine common ground, where the language most overlaps, while identifying the greatest disparities in how physicians and patients think and speak.

Both Chris Stevens, my faculty recommender, and Dr. Daniel Hinshaw, a Professor Emeritus of Surgery at the University of Michigan and ND Institute for Advanced Study Residential Fellow, were also key players in the success of this research project.

Chris Stevens has provided unwavering support for the pursuit of my passions. He is a role model because his many charitable initiatives have inspired me to innovate in a way that will positively impact the lives of others in the future. In a pre-departure meeting with Dr. Hinshaw, he introduced me to the Galilee Palliative Care Unit and the role that Orthodoxy may play in Greek end-of-life care. He spoke about his own missions in the East promoting improved care abroad with Dr. Aliki and other physicians. I was able to witness this first-hand at Galilee and found Dr. Aliki’s perspective on palliative care and knowledge about teaching clinical communication to be invaluable in my learning. Dr. Hinshaw also explained that there are likely differences between city and rural dealings with death based on the greater proximity to tradition and Orthodox teachings in villages than in more modernized and diverse areas such as Athens. This was confirmed while I was in Greece, as I found that some individuals request to be buried in their village of origin rather than the cemetery in the Athens city-centre. It also helped me in examining the role of tradition, religion, and family in palliative care, because these aspects of life typically play more of a role in rural areas than cities. Overall, the information he provided led me to resources in Athens which aligned closely with my project goals. 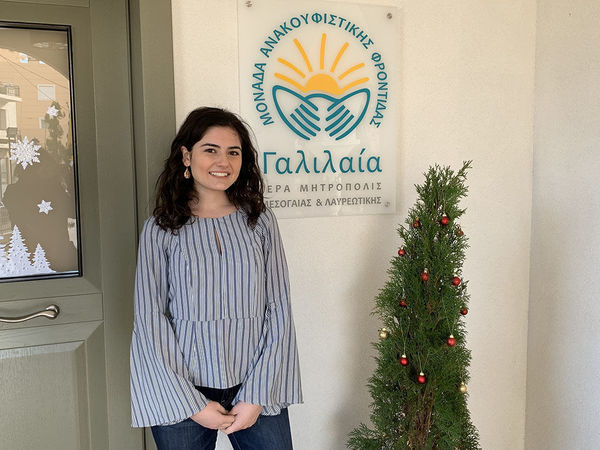 While there are extensive and well-established end-of-life rituals, particularly in rural Greece, I was intrigued to find this does not necessarily translate to a comfort with death in the medical setting. The mourning rituals are driven by the strong Greek family unit and widespread belief in Orthodox principles. This is a strong point of contrast between Greece and the United States, because over 90% of Greeks follow Christian Orthodox traditions whereas the U.S. is much more segmented in terms of religious beliefs.

A disparity between the approaches to end-of-life care as palliative care also exists between the US and Greece. Palliative care in hospitals and hospices is common in the U.S., while Galilee is the first and only hospice in Greece, typically welcoming people displaced from family members. This notion may serve to explain why clinical dialogues are lacking in comfort and clarity among Greek physicians, as those doctors do not necessarily stay close to patients at the end of life because the family plays the prominent care-taking role.

Further reinforcing this point, Dr. Halkias shared that the Greek population is generally unfamiliar with the term “palliative care” and, as a Greek-American, she had to explain it to her partner and family friend whose mother received the diagnosis at the time they met. Dr. Halkias also described that memorials may be held periodically for months after the death of family member, and annually beyond that. At the cemetery, I also learned that bodies are never cremated, and that bones of bodies are exhumed after five to seven years are stored in small boxes, a practice aligned with the belief that the soul needs an entity to return to in the future.

At the Byzantine Museum’s “Christians in the face of death” exhibit, I discovered the change in perception of death with the spread of Christianity during the Byzantine empire. It began to be seen more as a long sleep in anticipation of resurrection, showing again how religion soothes people dealing with death. At the Benaki Museum, I found that expressive and rhythmical folk songs about death trace back to early centuries of Christianity. So, Orthodoxy may play more of a role after death has occurred, celebrating the entrance of a loved one’s rest and alleviating finality. Meanwhile, there is still discomfort in dialogues before death has happened.

I believe there is an opportunity moving forward to improve end-of-life communication through educational programs, particularly those in medical schools.

Drs. Hinshaw and Chiotis introduced me to an initiative for narrative medicine at Columbia University, focused on capturing a patient’s entire story. I find this incredibly important, especially after my experiences in Greece witnessing the roles of religion, family, and faith during end-of-life care. Finally, Dr. Aliki inspired me by sharing that “finding something you’re excited about is what keeps you young.” Just as she had a spark which led her to initialize palliative care in Greece, I aspire to enact large-scale improvements in clinical conversations by incorporating of elements of poetic language and storytelling.

This experience pushed me to enter a new environment and meet a variety of interesting individuals, as well as visit sites including the First Cemetery of Athens, the Galilee Palliative Care Unit, Byzantine and Christian Museum, Benaki Museum, and more. I enriched both my understanding of history and religion and my own personal investigations in the medical humanities, connecting end-of-life care and poetry. As for personal growth and my career trajectory, my conversation with Dr. Aliki was especially insightful, as she described both her interaction with patients nearing death and pioneering of palliative care in Greece.

Ultimately, my time in Greece served as a way for me to continue comparing conversations about death and dying between the United States and the East, thus gaining a wider basis of knowledge for refinement of clinical dialogues.