Organized by the European Academy of Religion, the tournament was part of a week-long conference that brought legal scholars from around the world to speak at universities throughout Bologna about the intersection of law and religion. The competition took place at the University of Bologna, the world’s oldest continuously operating university. The Notre Dame team competed against teams from Russia, Spain, Italy, England, and the United States. 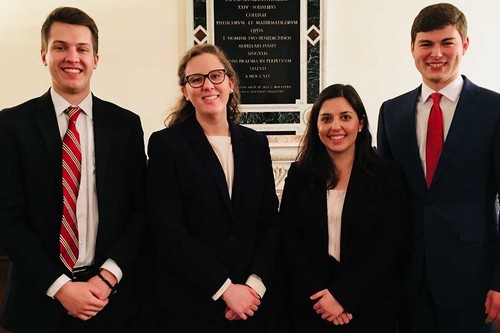 Blais explained that the competition “appealed to us because of its unique opportunities—few students receive the chance to hone their written and oral advocacy skills in such a distinctive setting. All four of us have an interest in the Religion Clauses of the First Amendment, but to be able to compete at an international venue really sold us on the whole idea. The United States has developed a specialized jurisprudence in terms of religious freedom, so the opportunity to juxtapose that knowledge with European law was fascinating.” 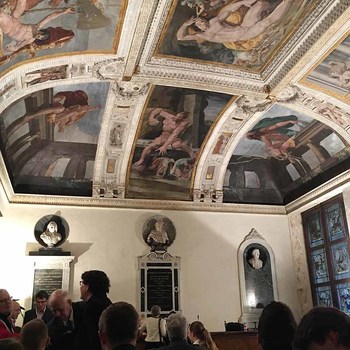 The competition was focused on a hypothetical case involving a same-sex couple who were suing a private university with a religious mission for denying their request to marry in the university chapel. Teams in the tournament were tasked with arguing each side of the case in front of either a mock United States Supreme Court or a mock European Court of Human Rights.

The Notre Dame team chose to participate in the Supreme Court division and were judged by a distinguished panel of justices, including Judge Jerry E. Smith of the U.S. Court of Appeals for the Fifth Circuit, Justice Michael J. Wilkins, formerly of the Utah Supreme Court, and Professor Michael P. Moreland of Villanova Law School.

The team stressed, though, that each component of the competition was a deeply collaborative effort. Sanchez explained that “we helped prepare our teammates Megan Ball and Lawrence Wesco for oral argument by posing important question to them during our preparation sessions, just as the judges did on the day of the oral arguments.” Ball added that “the work of collaborating with my brief writer in order to explore the intricacies of our argument and determine how to clearly articulate my position to the panel of judges was thrilling, satisfying, and a glimpse into the type of work I hope to one day do. The entire experience was challenging, but incredibly rewarding.” 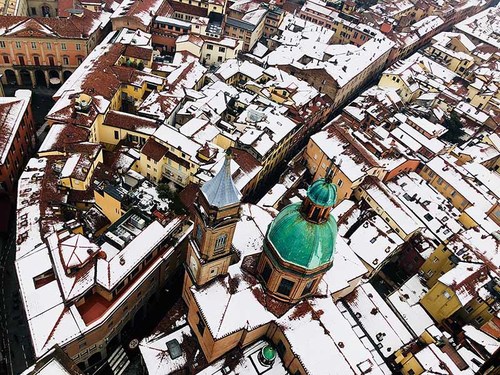 Other team members also stressed the rigorous preparation process, and the value they gained from it. “Our team spent hours in preparation posing difficult hypothetical and legal questions to one another, and I am grateful for how this experience broadened my perspective and enhanced my legal reasoning skills. This experience was rigorous but well worth the effort,” said Wesco.

In addition to the knowledge and experience they gained from preparing and presenting their cases, the team also learned much from other tournament participants. Prior to competing in the Supreme Court division of the competition, the team had the opportunity to observe the teams presenting to the European Court of Human Rights. This proved to be an eye-opening experience.

Wesco said that the approach and style of the arguments presented to the European Court was different from what he is used to seeing in the United States. For instance, the layers used distinctive presentation techniques and positioned themselves differently, standing at their counsel tables rather than at the podium. Their approach to the legal questions was also different. “The most significant facts from the European Court perspective were not always the same pivotal facts from the American legal perspective,” Wesco said. 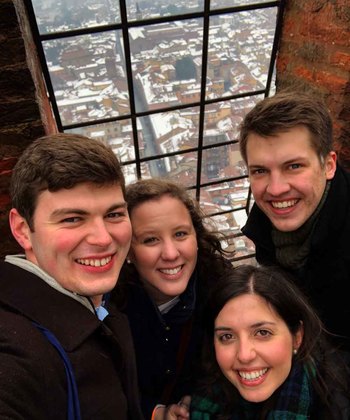 For Blais, the competition underscored that the legal tension between religious freedom and discrimination is not a distinctly American phenomenon: “It is easy to become focused on American jurisprudence as students because we are surrounded and inundated with it, seemingly every second of the day while at law school. This tournament allowed us to see the intersections of religion and law on a broader scale and showed us that every legal system must grapple with the unique issues that these intersections pose.” The experience, he stressed, “has given me some important perspective going forward as a law student and future lawyer.”