The $10,000 Laura Shannon Prize has been described as “a major landmark in the world of humanities research and publishing” in the Anglophone world by Sir Christopher Clark, Regius Professor of History at the University of Cambridge.  It is awarded annually to the author of the best book in European studies that transcends a focus on any one country, state, or people to stimulate new ways of thinking about contemporary Europe as a whole, and recognizes alternately books in the humanities and in history & social sciences.  This cycle considered books in the humanities published in 2013 and 2014.

The members of the final jury were as follows: 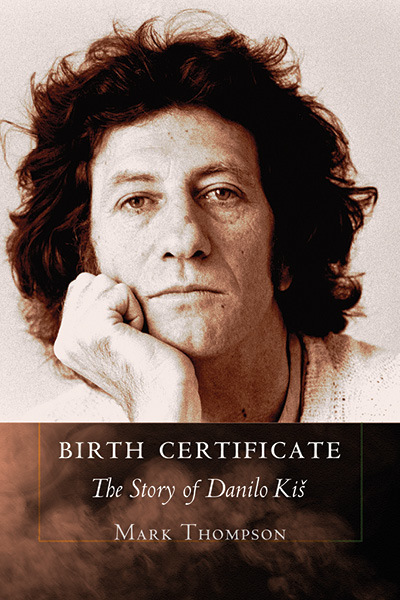 Mark Thompson’s Birth Certificate is an eloquent biography of a major Yugoslav writer too little-known in the Anglophone world.  Impressive, eccentric, at times controversial, Danilo Kiš (1935-1989) belonged to many cultures and traditions. He is best-known for his playfulness with literary form.  Thompson traces his career with an eye toward Kiš’s literary significance. What is remarkable about this biography is how skillfully it relates literary significance to shifts in the history of central Europe. The biography is itself a formal tour de force, combining journal fragments, photographs, and interviews with Thompson’s own beautifully-written prose. Richly informative, Birth Certificate is a brilliant case for Kiš’s importance in cultural history.  As Thompson concludes: “From Kosovo’s ethnic tyranny to Diderot’s enlightenment and beyond—to Joyce, Borges, and a reunited Europe—is almost too far to measure; but it is there, along that spectrum, that Kiš’s writing shines most brightly.” This book illuminates that brightness, and we hope that this imaginatively-printed volume will introduce more readers to this complex figure.

Mark Thompson is Reader in Modern History at the University of East Anglia (U.K.).  His career has included various positions with United Nations missions, with civil society organizations, and in journalism.  Thompson will accept the award and present a lecture in the fall semester of 2016 at the University of Notre Dame.  During the visit, he will engage in discussions with undergraduate and graduate students as well as faculty members in a variety of departments.

The jury also chose to award honorable mention to two books: Joy Calico’s Arnold Schoenberg’s A Survivor from Warsaw in post-war Europe published by the University of California Press and Krisztina Fehérváry’s Politics in Color and Concrete: Socialist Materialities​ and the Middle Class in Hungary published by Indiana University Press.

The jury commended Joy Calico’s Arnold Schoenberg’s A Survivor from Warsaw in post-war Europe as a searching exploration of the way in which one of the great musical reflections on the Holocaust had been received in the communist countries after the Second World War. The book brought much new information to light, and was particularly illuminating concerning the status of Jews and of art devoted to their suffering during the communist years.

The jury also commended Krisztina Fehérváry’s Politics in Color and Concrete: Socialist Materialities​ and the Middle Class in Hungary as an unusually imaginative study of life in a bleak Hungarian monotown. The book depicts the population’s attempt to express an emerging middle-class identity during the communist years. The jury praised the book as both a contribution to the phenomenology of aesthetic deprivation and a fascinating essay in the history and sociology of modernist vernacular architecture.

The Nanovic Institute for European Studies at the University of Notre Dame is committed to enriching the intellectual culture of Notre Dame by creating an integrated, interdisciplinary home for students and faculty to explore the evolving ideas, cultures, beliefs, and institutions that shape Europe today.  For additional information about the Nanovic Institute and the Laura Shannon Prize, please see nanovic.nd.edu/prize.