Since his first visit to Ukrainian Catholic University (UCU) in 2004, A. James McAdams has been a faithful advocate of the institution. In recognition of his sustained commitment to the university, his efforts to promote Catholic education in Eastern Europe, and his research on global communism, UCU has awarded McAdams an honorary doctoral degree.

McAdams is Director of the Nanovic Institute for European Studies and the William M. Scholl Professor of International Affairs in Notre Dame’s Department of Political Science. He has written four books and numerous journal articles on communism and its influence throughout the world. His latest book, The Vanguard of the Revolution: The Global Idea of the Communist Party, provides a comprehensive history of the communist party in the 20th century and argues that the party was able to flourish in diverse settings because of its adaptable message and charismatic leaders.

UCU’s President, Bishop Borys Gudziak, and its Rector, Rev. Bohdan Prach, said in a joint letter that McAdams’ “rigorous academic research on global communism and its devastating influence on society and the mindset of peoples in Eastern Europe made [him] sensitive to the transformation of post-communist, post-authoritarian, and post-colonial society in Ukraine.”

In addition, the two stressed that McAdams has not been content to remain a friendly spectator and research-driven scholar of Ukraine. Instead, he has deployed his academic credentials and and connections "to help newly emerging academic communities in Eastern Europe to develop their institutional muscles and build the capacity of their best people.”

Chief among McAdams’ academic development initiatives in Eastern Europe is the Catholic Universities Partnership, which received its initial impulse from meetings McAdams had with university officials during his first visit to UCU in 2004.

"I am thrilled to see how much UCU has grown from 2004-2018. It has become a model of integrity in a profoundly corrupt culture." —A. James McAdams

The Catholic Universities Partnership consists of a constellation of networking activities between Notre Dame and Catholic universities in Ukraine, Poland, Slovakia, Hungary, Croatia, Georgia, Germany, and a variety of other western countries. Leaders from universities in the partnership meet regularly—Gudziak and UCU’s Vice-Rector for University Mission, Myroslav Marynovych, have each visited Notre Dame recently—and convene annually for a conference on Catholic educational issues (hosted, this year, by UCU).

This summer, the Nanovic Institute will lead the second installment of the Summer Leadership Institute. During this weeklong program, leaders from partnership universities will gather at Notre Dame to build leadership skills, engage in strategic planning, and discuss philanthropic development.

Universities in the partnership have also established exchange programs between each other. Since the beginning of the partnership, the Nanovic Institute has funded several visiting scholars each year from partnership institutions. Fifteen researchers from UCU have participated in this program, which gives scholars the opportunity to live at Notre Dame, conduct academic research, and meet with faculty and administrators for a semester or during the summer. McAdams and the Nanovic Institute have also helped several Notre Dame students visit UCU to serve as teaching assistants during its English Summer School.

“For many years we at the Ukrainian Catholic University have been blessed by [McAdams’] trust and friendship. We can hardly imagine what UCU would have looked like without [his] solidarity with and commitment to our academic community. We appreciate it very much,” said Gudziak and Prach. They note that while UCU now has about 250 faculty, 1500 students, and dozens of institutes and centers, it was only beginning to blossom when McAdams first became involved with the university.

In the speech McAdams delivered upon his acceptance of the degree, he remarked that although UCU is not nearly as old or developed as Notre Dame, UCU has an “epistemological advantage” in advancing its Catholic mission. “For UCU’s faculty and students, the memory of persecution, of political prisons, and of secretly celebrating Mass behind closed blinds, is still alive. So, too, are the hang-over effects still alive from a half century of communist and Soviet domination.”  These challenges, McAdams said, “have provided UCU with the benefit of having to focus directly on what counts most for a Catholic university.”

McAdams praised UCU for the courageous role its students and faculty played during the Orange revolution and the revolution of Maidan and said that he was “honored” to be part of an institution that has lived up to its mission to serve “the glory of God, the common good, and the dignity of the human person.”

“I am thrilled to see how much UCU has grown from 2004-2018,” McAdams said. “It has become a model of integrity in a profoundly corrupt culture.” 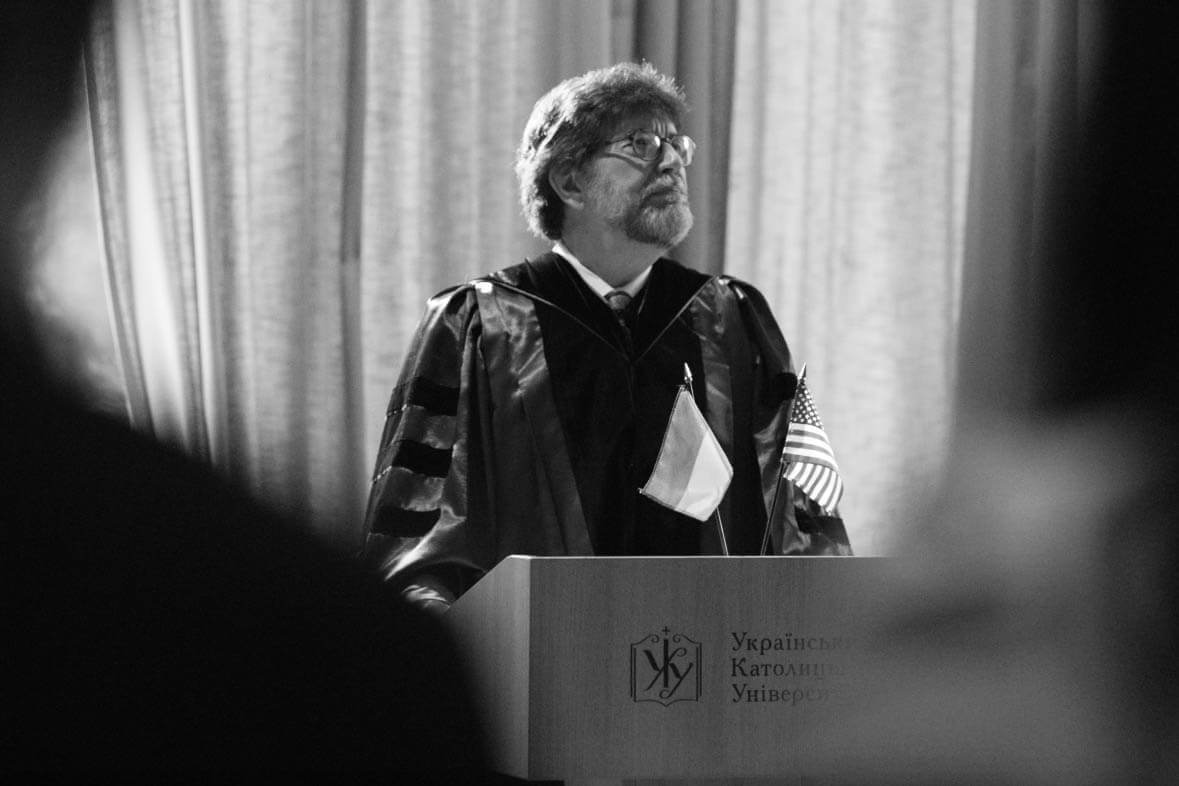