The Nanovic Institute for European Studies at the University of Notre Dame is proud to announce the 2020 shortlist for the Laura Shannon Prize in Contemporary European Studies. Carrying a prize of $10,000, the Laura Shannon Prize is awarded annually to the author of the best book in European studies that transcends a focus on any one country, state, or people to stimulate new ways of thinking about contemporary Europe as a whole.

The 2020 Laura Shannon Prize will be awarded to the best humanities book published in 2017 and 2018. The winning book is selected by a jury of five eminent scholars in European studies, at least three of whom are prominent scholars serving at institutions other than the University of Notre Dame. The winner will be announced in January 2020.

The 2020 shortlist for the Laura Shannon Prize is:

Max Bergholz, author of Violence as a Generative Force: Identity, Nationalism, and Memory in a Balkan Community (Cornell University Press), 2019 Laura Shannon Prize winner in the history and social sciences cycle, will accept the 2019 prize with a lecture on November 21, 2019. The winner of the 2020 Laura Shannon Prize will accept their prize with a lecture next fall at the University of Notre Dame.

Nominations for the 2021 history and social sciences cycle (for books published in 2018 and 2019) are due January 31, 2020. For more information on the nomination process, please visit nanovic.nd.edu/prize.

Now in its tenth year, the Laura Shannon Prize is made possible through a generous endowment from Michael and Laura Shannon of Houston, Texas. Laura serves on the Nanovic Institute’s Advisory Board and Michael, class of 1958, serves on Notre Dame’s Graduate Studies and Research Advisory Council.

Brief summaries of the five shortlisted titles, as found on the websites of the books and publishers, can be read below. 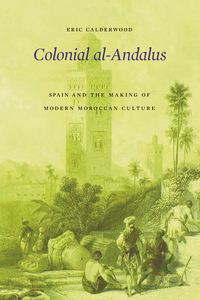 Colonial al-Andalus: Spain and the Making of Modern Moroccan Culture by Eric Calderwood
The Belknap Press of Harvard University Press

“Through state-backed Catholicism, monolingualism, militarism, and dictatorship, Spain’s fascists earned their reputation for intolerance. It may therefore come as a surprise that 80,000 Moroccans fought at General Franco’s side in the 1930s. What brought these strange bedfellows together, Eric Calderwood argues, was a highly effective propaganda weapon: the legacy of medieval Muslim Iberia, known as al-Andalus. This legacy served to justify Spain’s colonization of Morocco and also to define the Moroccan national culture that supplanted colonial rule.

“Writers of many political stripes have celebrated convivencia, the fabled ‘coexistence’ of Christians, Muslims, and Jews in medieval Iberia. According to this widely-held view, modern Spain and Morocco are joined through their shared Andalusi past. Colonial al-Andalus traces this narrative to the mid-1800s, when Spanish politicians and intellectuals first used it to press for Morocco’s colonization. Franco later harnessed convivencia to the benefit of Spain’s colonial program in Morocco. This shift precipitated an eloquent historical irony. As Moroccans embraced the Spanish insistence on Morocco’s Andalusi heritage, a Spanish idea about Morocco gradually became a Moroccan idea about Morocco. 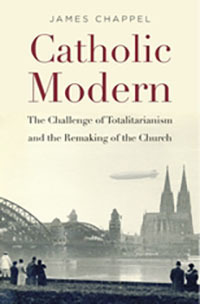 Catholic Modern: The Challenge of Totalitarianism and the Remaking of the Church by James Chappel
Harvard University Press

“In 1900, the Catholic Church stood staunchly against human rights, religious freedom, and the secular state. According to the Catholic view, modern concepts like these, unleashed by the French Revolution, had been a disaster. Yet by the 1960s, those positions were reversed. How did this happen? Why, and when, did the world’s largest religious organization become modern?

“James Chappel finds an answer in the shattering experiences of the 1930s. Faced with the rise of Nazism and Communism, European Catholics scrambled to rethink their Church and their faith. Simple opposition to modernity was no longer an option. The question was how to be modern. These were life and death questions, as Catholics struggled to keep Church doors open without compromising their core values. Although many Catholics collaborated with fascism, a few collaborated with Communists in the Resistance. Both strategies required novel approaches to race, sex, the family, the economy, and the state.

“Catholic Modern tells the story of how these radical ideas emerged in the 1930s and exercised enormous influence after World War II. Most remarkably, a group of modern Catholics planned and led a new political movement called Christian Democracy, which transformed European culture, social policy, and integration. Others emerged as left-wing dissidents, while yet others began to organize around issues of abortion and gay marriage. Catholics had come to accept modernity, but they still disagreed over its proper form. The debates on this question have shaped Europe’s recent past—and will shape its future.” 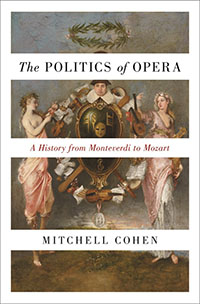 The Politics of Opera: From Monteverdi to Mozart by Mitchell Cohen
Princeton University Press

“The Politics of Opera takes readers on a journey into the entwined development of opera and politics, from the Renaissance through the turn of the nineteenth century. What political backdrops have shaped opera? How has opera conveyed the political ideas of its times? Delving into European history and thought and an array of music by such greats as Lully, Rameau, and Mozart, Mitchell Cohen reveals how politics—through story lines, symbols, harmonies, and musical motifs—has played an operatic role both robust and sotto voce.

“Cohen begins with opera’s emergence under Medici absolutism in Florence during the late Renaissance—where debates by humanists, including Galileo’s father, led to the first operas in the late sixteenth century. Taking readers to Mantua and Venice, where composer Claudio Monteverdi flourished, Cohen examines how early operatic works like Orfeo used mythology to reflect on governance and policy issues of the day, such as state jurisdictions and immigration. Cohen explores France in the ages of Louis XIV and the Enlightenment and Vienna before and during the French Revolution, where the deceptive lightness of Mozart’s masterpieces touched on the havoc of misrule and hidden abuses of power. Cohen also looks at smaller works, including a one-act opera written and composed by philosopher Jean-Jacques Rousseau. Essential characters, ancient and modern, make appearances throughout: Nero, Seneca, Machiavelli, Mazarin, Fenelon, Metastasio, Beaumarchais, Da Ponte, and many more.

“An engrossing book that will interest all who love opera and are intrigued by politics, The Politics of Opera offers a compelling investigation into the intersections of music and the state.” 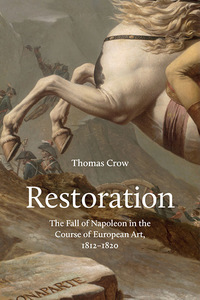 Restoration: The Fall of Napoleon in the Course of European Art, 1812-1820 by Thomas Crow
Princeton University Press (In association with the National Gallery of Art, Washington, DC)

“As the French Empire collapsed between 1812 and 1815, artists throughout Europe were left uncertain and adrift. The final abdication of Emperor Napoleon, clearing the way for a restored monarchy, profoundly unsettled prevailing national, religious, and social boundaries. In Restoration, Thomas Crow combines a sweeping view of European art centers—Rome, Paris, London, Madrid, Brussels, and Vienna—with a close-up look at pivotal artists, including Antonio Canova, Jacques-Louis David, Théodore Géricault, Francisco Goya, Jean-Auguste-Dominique Ingres, Thomas Lawrence, and forgotten but meteoric painters François-Joseph Navez and Antoine Jean-Baptiste Thomas. Whether directly or indirectly, all were joined in a newly international network, from which changing artistic priorities and possibilities emerged out of the ruins of the old.

“Crow examines how artists of this period faced dramatic circumstances, from political condemnation and difficult diplomatic missions to a catastrophic episode of climate change. Navigating ever-changing pressures, they invented creative ways of incorporating critical events and significant historical actors into fresh artistic works. Crow discusses, among many topics, David’s art and influence during exile, Géricault’s odyssey through outcast Rome, Ingres’s drive to reconcile religious art with contemporary mentalities, the titled victors over Napoleon all sitting for portraits by Lawrence, and the campaign to restore art objects expropriated by the French from Italy, prefiguring the restitution controversies of our own time. 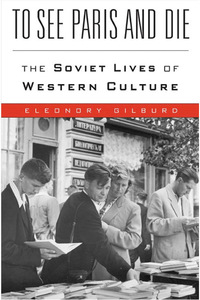 To See Paris and Die: The Soviet Lives of Western Culture by Eleonory Gilburd
The Belknap Press of Harvard University Press

“The Soviet Union was a notoriously closed society until Stalin’s death in 1953. Then, in the mid-1950s, a torrent of Western novels, films, and paintings invaded Soviet streets and homes, acquiring heightened emotional significance. To See Paris and Die is a history of this opening to the West.

“At the heart of this history is a process of translation, in which Western figures took on Soviet roles: Pablo Picasso as a political rabble-rouser; Rockwell Kent as a quintessential American painter; Erich Maria Remarque and Ernest Hemingway as teachers of love and courage under fire; J. D. Salinger and Giuseppe De Santis as saviors from Soviet clichés. Imported novels challenged fundamental tenets of Soviet ethics, while modernist paintings tested deep-seated notions of culture. Western films were eroticized even before viewers took their seats. The drama of cultural exchange and translation encompassed discovery as well as loss.

“Eleonory Gilburd explores the pleasure, longing, humiliation, and anger that Soviet citizens felt as they found themselves in the midst of this cross-cultural encounter. The main protagonists of To See Paris and Die are small-town teachers daydreaming of faraway places, college students vicariously discovering a wider world, and factory engineers striving for self-improvement. They invested Western imports with political and personal significance, transforming foreign texts into intimate belongings.

The Nanovic Institute for European Studies at the University of Notre Dame is committed to enriching the intellectual culture of Notre Dame by creating an integrated, interdisciplinary home for students and faculty to explore the evolving ideas, cultures, beliefs, and institutions that shape Europe today. The Institute is an integral part of Notre Dame’s Keough School of Global Affairs. For additional information about the Nanovic Institute and the Laura Shannon Prize, visit nanovic.nd.edu/prize.