The Nanovic Institute is pleased to announce that Jacob Vila has won the 2018 J. Robert Wegs Prize for Best Minor in European Studies Capstone Essay.

Jacob Vila, a senior finance major who will begin working at BMO Capital Markets in Chicago after graduation, said it was “a great honor” to win the Wegs Prize. He credits his interest in European studies to a class on Tudor history taught by Rory Rapple, a specialist in British and Irish history in the Notre Dame history department and the director of Vila’s capstone essay.

“Taking the European Studies minor was one of the best decisions I made at Notre Dame. The skills I developed in my history classes—the ability to write fluidly and parse difficult texts—are really important in the business world and will help me greatly during my career in finance.” ~Jacob Vila

Vila’s prize-winning essay, “Weathering the Storm: Thomas Cranmer’s Approach to Politics and Religious Reform during the Tudor Era,” examines the life of Thomas Cranmer (1489-1556), a leading figure in the English Reformation, the Archbishop of Canterbury during the reign of Henry VIII, and the author of The Book of Common Prayer.

According to Vila, scholarly opinion of Cranmer is mixed, with some portraying him as a saint and others portraying him as an unprincipled opportunist. Vila, however, believes that we should view Cranmer somewhere in between these extremes.

“Cranmer, much like the majority of councilors during his time, was not a hero,” Vila writes. “He proved unwilling to die for his beliefs (until he was forced to do so) or fight for his allies to an extent that put himself at significant risk.”

However, Vila claims that it is also misleading to portray Cranmer merely as an opportunist. After all, Vila notes, Cranmer could have fled when Queen Mary—a Catholic who was sure to be unfriendly to Cranmer and his Protestant commitments—ascended the throne. “That he decided to stay and attempt to salvage the evangelical movement is evidence against those who wish to view him as an eternally spineless individual,” Vila writes.

Vila also argues that while one of his political blunders eventually led to Cranmer’s execution by Queen Mary, he was, for the majority of his life, a shrewd player of the Tudor game: “Although he indeed acted cowardly at times, Cranmer understood how to play the long game in Tudor politics. He knew when to push evangelical reforms with his allies during Henry’s reign, but also understood when to surrender to consensus or superior powers in order to fight another day.”

"Mr. Vila's essay was well-researched and beautifully-written," said Anthony Monta, Associate Director of the Institute, "and it was gratifying to see a Finance major tackle a subject so well that was so far removed from his normal course of studies. This kind of well-roundedness shows Notre Dame at its scholarly best."

For more information about the prize, visit nanovic.nd.edu/wegs-prize. 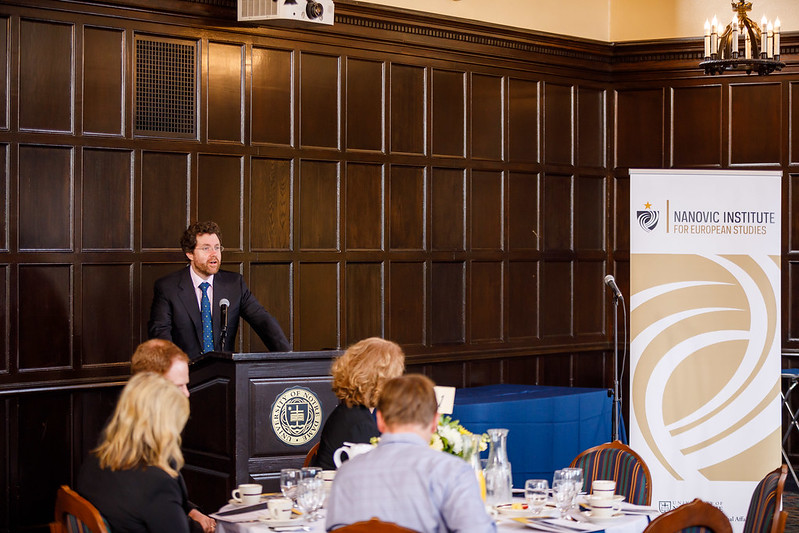