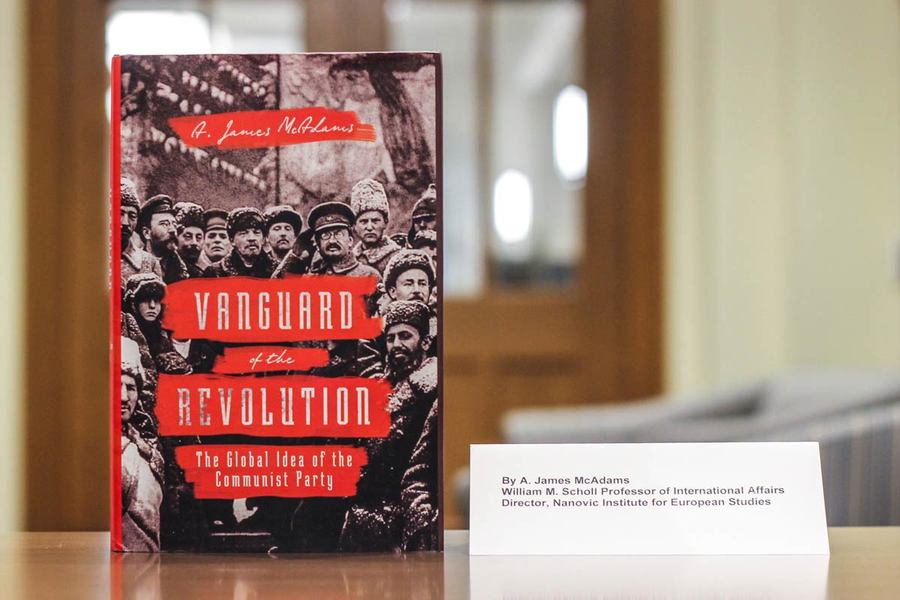 The Nanovic Institute is pleased to announce that its director, A. James McAdams, has published his latest book, Vanguard of the Revolution: The Global Idea of the Communist Party.

In the book, Professor McAdams says that he aims to accomplish two goals: (1) to give a political history of the communist party, and (2) to give an argument about why the party took so many different forms.  According to McAdams, the communist party offered an adaptable message with broad appeal that charismatic leaders such as Lenin, Mao, and Castro could adjust to the specific conditions in their countries.  In the hands of these dominant figures, the party’s ideals often degenerated into a tool for despotism, and the personality cult that followed them was difficult for the party to escape.  The book provides a detailed analysis of these personalities and the ways they shaped the communist party in their own unique ways.  No other book has provided a comprehensive view of the communist party as a whole, and it greatly enhances our understanding of a central political movement of the 19th and 20th centuries.

The book received praise in a review by the Times Higher Education (see here), where it is described as “the first book of its kind to offer a global view of the party’s 20th-century history.  Here we see the major junctures of its development (and reversals) on every continent, in a narrative that shows how diverse, adaptable and even incongruous different communist party strategies could be.”  The review emphasizes “the astonishing readability of this account: the general reader is rewarded with a brilliant and sweeping introduction to one of the most provocative political institutions of our times.”

In addition, The New York Times called the book a "successful example of big think history" (see here).  The review continues: "If war built the state, it also helped build the Communist Party.  Vladimir Lenin’s faction, the Bolsheviks, was particularly aided by World War I.  And Communism, once in power, reversed Clausewitz’s famous dictum and made politics war by other means.  The party often attacked the people--first in the Russia of Lenin and Stalin, but most especially in Mao Zedong’s China, from the Hundred Flowers movement to the Great Leap Forward and then the Cultural Revolution, killing untold millions of people. It’s a lively if depressing story."

To learn more about the book, and the writing of it, you can read a recent interview of Professor McAdams with Princeton University Press (see here).