Early in 2019, The New York Times published a “Globetrotting” list of books from a variety of genres and countries. Drawing from works originally published in and about every inhabited continent, the list presented an assortment of novels, memoirs, nonfiction works, and collections of poetry or short stories that drew critical acclaim in their original languages before being made available to the English-speaking world.

In response to this article, Graduate Student Fellows from the Nanovic Institute for European Studies present a collection of book reviews drawn from NYT’s “Globetrotting”, in particular from those works published in Europe or about European issues. Collectively, these brief reviews cover a variety of topics and genres. In bringing together this array of reviews, the Nanovic Graduate Fellows hope to draw attention to exceptional pieces of scholarship and literature that highlight diverse voices across the European continent in a time when hearing them is so gravely important.

Clare O'Hare, Ph.D. Student in the Department of Political Science, writes this week's review on Article 353 by Tanguy Viel. 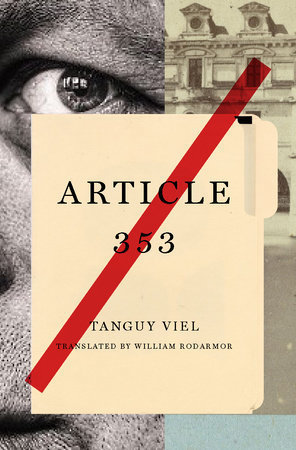 Article 353. In my head I can hear it said, with “Alinea 1” following Article 353. For all that the title of the book refers to an article in the French Criminal Code, this book is not a traditional "who-dunnit" but a very atmospheric tale of love and loss – both of the individual but also of the love and loss of rural and coastal communities as economies change. It is a beautifully written book, that brings the sight, sounds, and smells of coastal Brittany to life. On every page, my own memories of life in Brittany came rushing back to me: I could practically feel the damp winter air and the glorious summer days when the sun finally shone. I saw the Café du Port, and the local football team, I heard the savage force of the Atlantic crashing onto the coastal walls and can taste the salt in the coastal air.

More than that, Viel’s novel, which is a thought-provoking page-turner, evokes the dilemmas that small towns and villages face on a daily basis – how to stay alive as the old ways of life disappear in the face of modern economic realities that are drawing people away to cities and towns. When the local landscape changes as developers move in, houses beyond the reach of the local community are built. While the book opens with, and is ostensibly about the murder of a man, it is an ode to a community that is dying, perhaps poisoned and murdered, when the dream of a brighter future is dangled in front of it. It is also a confession: there is something of a religious quality to the way the book is structured as a conversation between the protagonist and the instructing judge. Quite what the protagonist is confessing to or represents is left to the reader to determine. Is it a murder mystery or is this story asking a much bigger question of what responsibility each of us has for promoting a more equal and just society? That is the most striking part for this small book. It is a novel that gives pause for reflection on the reality of modern life.