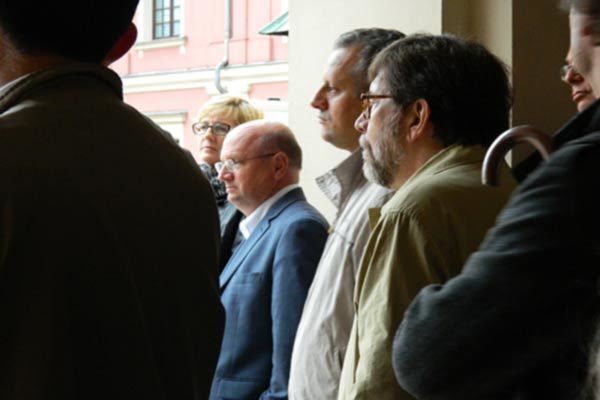 Representatives from the Nanovic Institute, the Keough School of Global Affairs, and the Department of Theology met Catholic leaders of higher education from central and eastern Europe this past week at the John Paul II Catholic University (KUL) in Lublin, Poland.

The purpose of the meeting was to reflect on issues Catholic universities face in Europe and America twenty-five years after Pope John Paul II’s encyclical Ex corde ecclesiae (“From the Heart of the Church”). In the seminar room where Fr. Karol Wojtyla taught students for twenty-four years, participants at the conference delivered papers in three sessions. The first session focused on Ex corde and Ignatian spirituality (Vasil), three issues in Euro-Atlantic culture to which Catholic universities must respond (Szostek), and the nature of the Catholic university as a place of witness and dialogue (Cavadini). The second session addressed themes such as secularism and the porous self (Appleby), the necessity of theology (Wierzbicki), and possible models of philosophy at the Catholic university (Gutowski). The last panel looked forward, focusing on the challenges of creating a new Catholic university in secular Europe (Tanjic) and the necessity of doing so in light of a global need for spiritual and intellectual liberation (Suchocka).

The conference was hosted by Vice-Rector of KUL, Prof. Urszula Paprocka-Piotrowska, and organized by Rev. Prof. Slawomir Nowosad and his assistant, Liliana Kycia, MA.