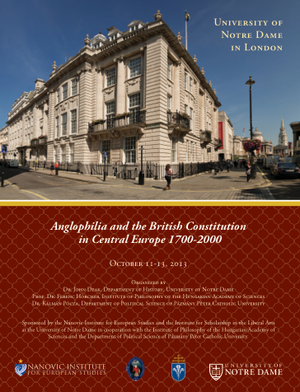 What do Hungary and England have in common? Certainly not their language.

It turns out that Hungary, like England, existed for centuries without a written constitution. Their first written version was only established in 1949 and followed the (Stalinist) Soviet Constitution of 1936. This was amended, but not replaced, in 1989. In 2004, Hungary joined the European Union project and subsequently ratified the Lisbon Treaty (in effect a European constitution) in 2007. In 2011 however Hungary adopted an entirely new written constitution with a vote of 262-44, parts of which are thought to be at odds with the Lisbon Treaty. That constitution, “The Fundamental Law of Hungary,” came into legal force on April 25, 2012 ([Ed.]) 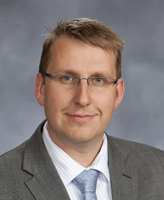 As an historian, I am not alone in thinking about larger legal and constitutional changes, but it is not always easy to find friends with similar interests when it comes to central Europe. Luckily I have the Nanovic Institute for European Studies, which has been a second home for me since I arrived at the University of Notre Dame. In the past four years, the Institute invited to campus two scholars from Pázmány Péter Catholic University in Budapest, Hungary, who shared my interest in constitutional change in central Europe: Ferenc Hörcher and Kálmán Pócza. Over the course of his stay, Kálmán shared with me some of his ideas for bringing together scholars interested in England, and English constitutional ideas in the broad sweep of central European history.

A remarkable number of things happened very quickly. Kálmán contacted Ferenc, and they set about talking to their colleagues all over central Europe. Watching them work, I quickly learned that the importance of the Nanovic Institute’s visiting scholars program was not only what we offered to central European scholars (an office, a library), but what they offered to us: connections. Kálmán and Ferenc seem to know entire ranks of intellectuals, legal scholars, and historians from Cambridge to Debrecen. We soon had a large list of accomplished scholars, thinkers, and historians from all over Europe who were interested in coming together.

After that, the operational pieces started to fall into place. We secured a weekend at Notre Dame’s beautiful London Centre, just off Trafalgar Square in the heart of the city. The Nanovic Institute along with a Henkels grant from Notre Dame’s Institute for Scholarship in the Liberal Arts came through with generous support. So, between the 11th and 13th of October, eighteen scholars from North America, Great Britain, and the European continent are gathering to discuss Anglophilia and the British Constitution in Central European Political Thought, 1700-2000.

Our symposium will examine the idea of the British Constitution in central Europe from the eighteenth century to the present. Our purpose is to bring historical, philosophical, and political-science perspectives to a very real and present issue. In the twenty-first century, on both sides of the Atlantic, the role of parliamentary and judicial authority, human rights, and ideas of citizenship and identity loom large in public debate. We hope to capture the moment and the current climate of searching for answers to twenty-first century constitutional questions with our symposium.

Why “Anglophilia”? We are using this term to cast a broad net in which we hope to capture the importance, admiration for, and critical engagement with British constitutional law in central and Eastern Europe. Great Britain is and has been the primary example of a state with an unwritten constitution. Instead of a single document or collection of fundamental laws, Britain famously has built its public law on a body of precedents, conventions, and customs. These various conventions and precedents have served in a constitutional sense: investing power in public authorities, managing the relationship between the various governmental agencies, and regulating the relationship between these authorities and its citizens. And yet, the British system of parliamentary sovereignty has a long and rich history as serving as a model and a point of comparison for constitutional developments in central Europe, even as the nations of central Europe sought to codify their public law in strictly-defined constitutional documents.

In other words, we are looking at how the British style of public law and its organization of society have been influential in countries where this influence has not been recognized. In political histories of central Europe, for instance, the trend for a long time has been to treat these areas as having diverged from a “western,” normative model. While recent histories have begun to debunk looking at central Europe from a normative lens, they have not sought to register the ways in which parliamentary sovereignty and British constitutionalism have influenced political thought in central Europe. We aim to investigate this topic and bring it back into public discussion.

Moreover, the current political climate in Europe tells us that this is an important time to revive connections between British constitutional thought and praxis and the European continent. Since the middle of the twentieth century, the English constitutional model has slipped away from its perch as the prominent model for democratic states. Even after the communist regimes gave way to democratic societies, the framers of constitutions rejected British-style parliamentary sovereignty for a more continental version of popular sovereignty and constitutional jurisprudence. Moreover, in the recent revisions of the Hungarian Constitution, which took place under the auspices of the Hungarian People’s Party’s (Fidesz) super-parliamentary majority, the British constitutional system received scant attention. This fact is surprising, given the history of Hungarian political thought and the tradition of Anglophilia, which dates back to the eighteenth century. As the countries of central Europe continue to evolve their constitutional and political systems in their third decade since the fall of the Iron Curtain, we hope this British model will once again be part of their discussions.

I am extremely grateful for the opportunity to organize this symposium and for the Nanovic Institute, which brought great colleagues in Professor Hörcher and Dr. Pócza to campus. So even though I’ll be jet-lagged and tired, I won’t be standing alone in the corner at any cocktail parties. I’ll be discussing major changes in European political cultures with constitutional scholars and historians from all over Europe.