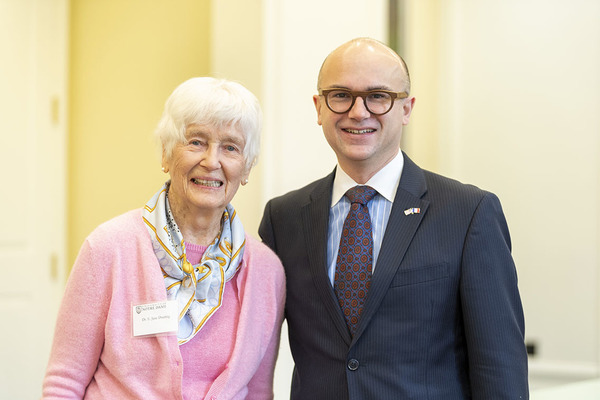 French Consul General Guillaume Lacroix was on campus in early February for the posthumous awarding of the Ordre des Palmes académiques ("Order of Academic Palms") to Bernard E. Doering, late professor emeritus of Romance languages and literatures, for his work in spreading French language and culture at Notre Dame for more than half a century. The award was presented to his widow, E. Jane Doering, professional specialist emerita in the College of Arts and Letters. Their four children were also able to be present for this special event.

The Ordre des Palmes académiques is a national honor bestowed by the French Republic to distinguished academics and figures in the world of culture and education. Originally established in 1808 by Emperor Napoleon Bonaparte as a decoration to honor eminent members of the University of Paris, it was changed into its current form as an order of merit on Oct. 4, 1955, by President René Coty.

Other honorees of the Palmes académiques at the University include the late Charles Parnell, who founded the Angers, France, study abroad program in the late 1960s (where 3,000 Notre Dame students have since studied), and Professor Emerita Catherine Perry, specialist in French poet Anna de Noailles.

Monsieur Lacroix, whose two-day visit to Notre Dame was organized and hosted by the Nanovic Institute for European Studies, also gave remarks on France's state of affairs as part of the Institute's "Conversations with Diplomats" lecture series. To read more about this widely attended lecture, click here.