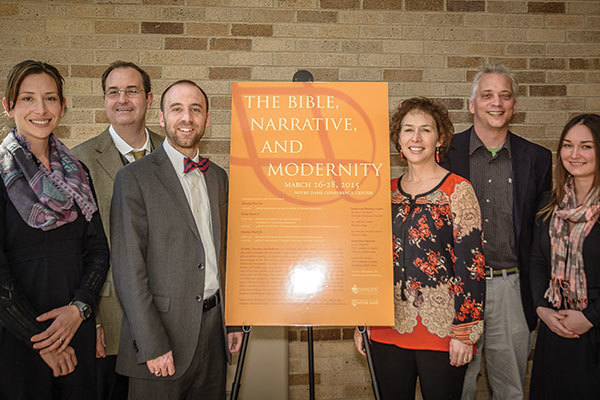 Jessica Hughes and Meagan Simpson, Doctoral candidates in English at the University of Notre Dame share their thoughts on "The Bible, Narrative, and Modernity." The symposium was supported by the Nanovic Institute's Graduate Student Conference Grant.

On March 26-28, 2015, we co-chaired a two-and-a-half day symposium at Notre Dame entitled “The Bible, Narrative, and Modernity” at Notre Dame. The event brought together scholars of eighteenth- and nineteenth-century Britain to re-imagine the relationship between religion and literature.

Joining an already rich and ongoing interdisciplinary project at Notre Dame, the symposium focused on the eighteenth and nineteenth centuries, seeking to up-end the common characterization of this period as increasingly secular.

By examining the Bible as narrative and the role it plays in shaping eighteenth- and nineteenth-century literature, the keynote speakers, faculty roundtable members, and audience members challenged the common narrative of secularization and explored a range of scholarly methods useful for exploring this theme in these two periods.

We were acutely aware of how vital the conversation surrounding religion and literature in the medieval and early modern periods is, in contrast to the eighteenth and nineteenth centuries, at Notre Dame. We therefore focused our energies on supplementing an already robust conversation by inviting an eighteenth-century scholar and a nineteenth-century scholar to campus to give lectures, lead workshops with graduate students, and engage with our faculty. We invited Dr. Misty Anderson, Professor of English, from the University of Tennessee, Knoxville where she holds the Allen C. Carroll Chair of Teaching and Dr. Timothy Larsen, Carolyn and Fred McManis Professor of Christian Thought, from Wheaton College.

Two keynote lectures led the conference. Dr. Misty Anderson (UT Knoxville) delivered the first. Her current book project, tentatively titled God on Stage, is a performance studies approach to representations of religious events, specifically sacred or supernatural encounters, on the eighteenth-century stage. Her keynote lecture, “Hoping for a Protestant Burial’: Centlivre, Farquhar, and the Politics of Protestant Comedy,” came from this most recent book project and described how religion on stage functioned as a matrix for re-imagining nationality in light of the Hanoverian succession.

Dr. Larsen delivered the second keynote, “Victorians and the Bible Beyond Belief,” which  reviewed his most recent scholarship and extended it in new ways. The lecture demonstrated the inescapable influence wielded by the Bible on Victorian culture, shaping the mentalities of major and minor figures alike — even those who wished to discard and discredit it. The lecture sought to overturn a widely accepted narrative of nineteenth-century secularization by describing how the very presence of doubt, Larsen said, presupposed the vitality of faith.

The graduate student workshops led by these faculty aimed to put our visiting scholars in closer contact with our doctoral students. We opened registration to various departments, including English, Literature, Theology, and History (among other language and literature departments). Doctoral students from English, Literature, and Theology were represented. We also asked our guests to share their work in progress.

The symposium also included two roundtable sessions. The first session, “Exploring Religion and Literature Methodology,” focused on methods deployed by eighteenth and nineteenth century scholars. This panel featured our invited guests, Timothy Larsen, Misty Anderson, and Richard Hughes Gibson, along with Susannah Monta, Timothy O’Malley, Romana Huk, and Henry Weinfield, all of Notre Dame. The second session, “Teaching the Bible Outside Theology,” focused on pedagogy, particularly the responsibilities involved in teaching the Bible and some classroom strategies for doing so. The panelists once again included our invited guests, along with Margaret Doody, James VanderKam, Gary Anderson, and Mark Noll, all of Notre Dame.

The symposium was a success. The support of the Nanovic Institute, from conception to execution, was overwhelming. We received compliments from our guest speakers and attendees on our hospitality, professionalism, and scholarly rigor on more than a few occasions. Thank you, Nanovic!

More on "The Bible, Narrative, and Modernity"