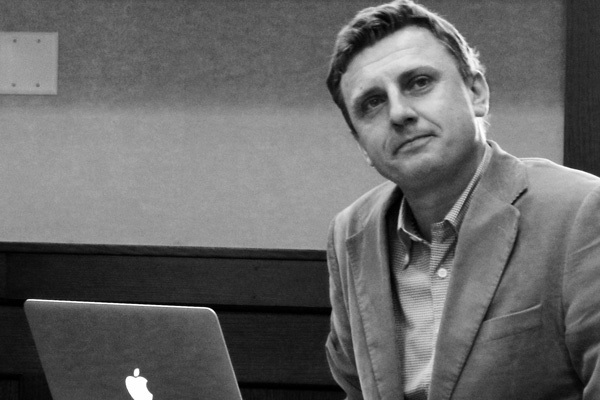 Dr. Ivan Koniar, Associate Professor of Philosophy and previous Vice-Dean of the Faculty of Arts & Letters at the Catholic University of Ružomberok (Slovakia) is a visiting scholar at the Nanovic Institute for the fall 2016 semester.

Dr. Koniar, your curriculum vitae shows that you have had a consistent interest over the years in the history of political thought. Can you tell us how you became interested in this area? Was there a particular teacher, or theme in your reading, or some historical pattern that led you to this?

After completing my Master’s in double major History and Philosophy I was thinking how to combine my interests in these two areas. By the time I met Marian Kuna (Nanovic Visiting Scholar from 2005-06) who channeled my attention to political and moral philosophy and showed me that historical study serves to remind us that no matter how natural present arrangements may appear they are the product of particular historical circumstances, and are therefore subject to revisions. A historical approach, as such, is essential to any effort to think critically about our beliefs on political theory and practice. I then went on to read classic books like Plato’s Republic, Augustine’s City of God or Hobbes’s Leviathan and realized that I had a deep interest in history of political though

After earning your Ph.D. in Philosophy, you held some interesting postdoctoral positions across Europe. Can you tell us a little about how you found them, and what kinds of experiences they were?

There was always a very supportive environment at my home university, notably at the Faculty of Arts and Letters, which endorsed young scholars to gain experiences from foreign institution across Europe. And I must say that I had a luck. At the Peace Research Institute Oslo (PRIO) and University of Glasgow, I bumped into people like Gregory Reichberg and Cian O’Driscoll who were willing to tutor an utter stranger coming from an unknown environment and patiently answer his rather dull questions. Here I realized that educational system in liberal democracies and a whole Western academia is miles apart from countries that used to be communist Europe.

You are currently at work on a book about the history of 'just war' reasoning. Can you tell us something about how you approach writing such a history?

The ethics of war has been enjoying a great attention over the last two decades. However, this field of study is currently overcoming an internal struggle between proponents of historical approach on the one hand and analytical approach on the other. I am convinced that the best way to understand ethical categories invoked in relation to war is to study their formation and usage over time. By revealing the historical content of these categories, this form of inquiry helps us to perceive their particularities and provides us to adapt them to contemporary circumstances as well. I am also convinced that we should treat the just war tradition not as a prepacked canon, but as an open practice and we should be ready to challenge the conventional accounts of the just war tradition. For instances, in general, the just war tradition is portrayed as a product of Christian political theology and the majority of scholars dates its origin to the 4th century CE. This common view, however, represents a rather selective perspective on the just war tradition. It ignores the fact that the reflections on the justification of war in terms of human and divine justice precede the writings of the early Christian theologians. If we pay a more detailed attention to the works of Greek historians, the philosophical works, the preserved speeches of public orators or the literary works of Greek poets and dramatists of classical Greek period, we discover rich and colorful world of thinking about the idea of just war. Despite the fact that we will not find there any systematic just war theory, the ideas that were in the center of classical Greek authors’ interest constitute an important consideration for both, the today understanding of origin of this tradition and the concept of just war itself.

To what extent has Notre Dame been a productive environment for you to work on this project?

First of all, in this way, I would like to express my deep gratitude for the opportunity I was given through the Nanovic Institute and its visiting scholar program. I have experienced here an atmosphere of friendship, dedication to mission and passion for excellence. I really appreciate resources and collections provided by the Hesburgh Library and the time for writing and creative part of my project. I also enjoyed the opportunity to converse with a lot of interesting people and thus challenge my ideas and convictions about my work. Last but not least I draw a lot of inspiration and I will return to my institution with a renewed sense of energy.

Universities all over the world of course share certain similarities, but have there been things at Notre Dame that have surprised you?

What surprised me the most was people being very kind and devoted to their Alma Mater. Every student, teacher or alumni I have met was extremely friendly, helpful and so proud to Notre Dame that it has been almost tangible and infectious. And I am also very proud that for a while I could have been a part of Notre Dame culture.