Beyond the Mother Tongue: The Postmonolingual Condition 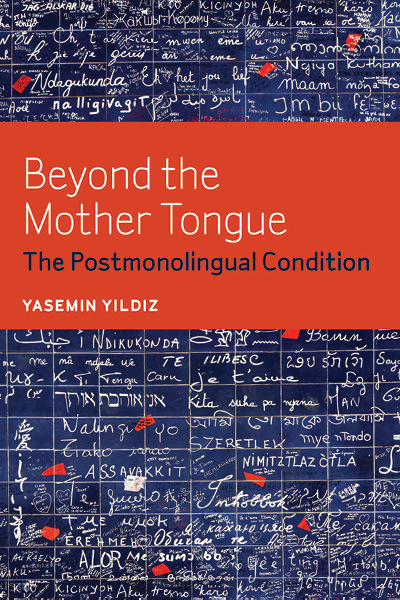 No problem is more crucial for European identity than that of the relationship of the monolingual to the multilingual and the relationship of each to the concept of the nation-state. Yasemin Yildiz’s Beyond the Mother Tongue is a finely-crafted exploration of a group of 20th-century German writers which excitingly recasts how these authors are defined or define themselves in terms of German as a language, revealing how the powerfully affective notion of the “mother tongue” functions for writers as different as Kafka (and Yiddish), Adorno (and the Fremdwort), Tawada (and Japanese), and Zaimoglu (and Turkish). Her studies disrupt a “monolingual paradigm,” showing how multiple our relations with languages can be. Yildiz brilliantly highlights what is at stake, ethically and politically, in the monolingual paradigm and in resistance to it, even where—perhaps especially where—the resistance might simply appear as linguistic playfulness. At stake is whether national identities can come to terms with multilingual realities. All future work will have to take account of her innovative work.

Yasemin Yildiz is Associate Professor of German and Conrad Humanities Scholar at the University of Illinois.  She received her M.A. in German Literature from the Universität Hamburg and her Ph.D. in German Studies from Cornell University. She also undertook graduate course work in Comparative Literature at the City University of New York on a Fulbright scholarship and attended the School for Criticism and Theory in Ithaca, NY. Her research focuses on twentieth- and twenty-first century German literature and culture.