Modernity and Bourgeois Life: Society, Politics and Culture in England, France and Germany since 175 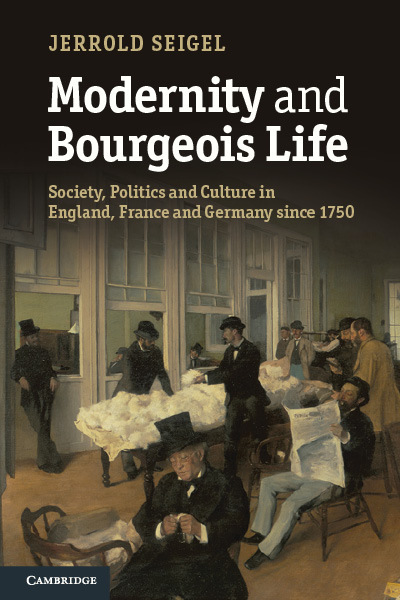 2014 Prize in the Humanities

A work of erudite detail and stunning originality, Jerrold Seigel’s Modernity and Bourgeois Life offers a magisterial account of the development of networks in terms of economy, politics, and aesthetic culture. In a volume that displays a lifetime of detailed research and reading, impeccably marshaled and prodigiously footnoted, Seigel argues for the emergence of a bourgeois form of life in which “networks of means” link distant energies and resources in ways that amplify the agency and social power of individuals and groups. He examines the distinctive shapes this bourgeois form of life has taken in England, France, and Germany, building a compelling case that brings apparently distinct factors and even antagonistic forces into focus in an original account of the constitutive features of modernity. Here is a work of scholarly synthesis and narrative power capable of informing many disciplines for decades to come.

Jerrold Seigel is the William R. Kenan, Jr., Professor of History Emeritus at New York University. Before arriving at NYU he taught at Princeton University, where he received a Ph.D. in 1963. He received a B.A. in History and Literature magna cum laude from Harvard. His first field of historical specialization was the Italian Renaissance, but he has since concentrated on more recent topics. He has held fellowships from the Fulbright Commission, the National Endowment for the Humanities, and the John Simon Guggenheim Foundation, and was twice a Visitor at the Institute for Advanced Study in Princeton. He has served as a visiting lecturer (maître d’études associé) at the Ecole des hautes études en sciences sociales in Paris, and in 2000 was a Resident at the American Academy in Rome.

Russell A. Berman
Walter A. Haas Professor in the Humanities
Stanford University