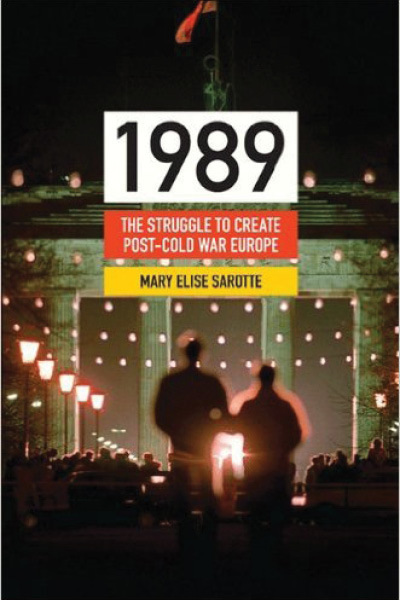 Mary Elise Sarotte in 1989: The Struggle to Create Post-Cold War Europe recounts the accidents, political calculations, and social changes that led to the fall of the Berlin wall and the reunification of Germany. Linking individual stories to high politics, Sarotte’s masterly narrative and skillful studies of key decision makers argues that the structure of today’s post-cold war world was not inevitable. Beautifully written and well-researched; a landmark study of European politics.

Mary Elise Sarotte’s newest book, 1989: The Struggle to Create Post-Cold War Europe, appeared with Princeton University Press on 9 November 2009, the 20th anniversary of the fall of the Berlin Wall. The Financial Times selected it as one of their “Books of the Year” and it has won three prizes: (1) the 2010 Robert H. Ferrell Prize of the Society for Historians of American Foreign Relations (SHAFR), for distinguished scholarship on US foreign policy; (2) the 2009 Prize from the German government’s Academic Exchange Service (DAAD), for distinguished scholarship in German and European Studies; and (3) the 2010 Marshall Shulman Prize of the American Association for the Advancement of Slavic Studies (AAASS, recently renamed ASEES; co-winner). In addition, the book received reviews in Foreign Affairs, The London Review of Books, The New York Review of Books, The New York Times Book Review, Süddeutsche Zeitung, and The Wall Street Journal, among other places. Sarotte’s previous publications include the books Dealing with the Devil, and German Military Reform and European Security, plus a number of scholarly articles. She has also worked as a journalist for Time, Die Zeit, and The Economist, and appears as a political commentator on the BBC, CNN International and Sky News. Sarotte earned her BA in History and Science at Harvard and her PhD in History at Yale. After graduate school, she served as a White House Fellow, and subsequently joined the faculty of the University of Cambridge. She received tenure there in 2004 and became a member of the Royal Historical Society before returning to the US to teach at USC. Sarotte is a former Humboldt Scholar, a former member of the Institute for Advanced Study in Princeton, and a life member of the Council on Foreign Relations. She is spending academic year 2010-11 on leave as a Visiting Scholar at the Center for European Studies at Harvard University.