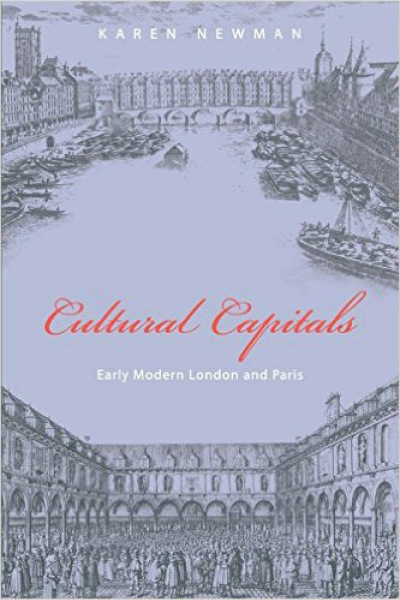 In this compellingly written work, Newman raises the bar for cultural studies. She exhibits a masterful command of the material, moving effortlessly between literary, sociological, scientific, and art-historical methods. Cultural Capitals is an impressive work of comparative historical scholarship that makes a cogent and timely contribution to contemporary theoretical debates about space, modernity, modes of historicism in literary and cultural studies.

Karen Newman is Professor of English at New York University. She has written widely on Shakespeare and Renaissance letters and culture and is the author of several books including Shakespeare’s Rhetoric of Comic Character (Methuen, 1985), Fashioning Femininity and English Renaissance Drama (Chicago, 1991); Fetal Positions. Individualism, Science, Visuality (Stanford, 1996); Cultural Capitals: Early Modern London and Paris (Princeton University Press, 2007) and Essaying Shakespeare (University of Minnesota Press, 2009). She co-edited Time and the Literary, essays from the 1999 English Institute (with Jay Clayton and Marianne Hirsch, Routledge, 2002) and translated The Story of Sapho in 2004 for The University of Chicago Press’s The Other Voice series. Her articles have appeared in various journals, including PMLA, Shakespeare Quarterly, Renaissance Drama and the Journal of Medieval and Early Modern Studies. She is on the editorial board of differences: A Journal of Feminist Cultural Studies and has held numerous fellowships including a Guggenheim and a fellowship from the National Endowment for the Humanities.