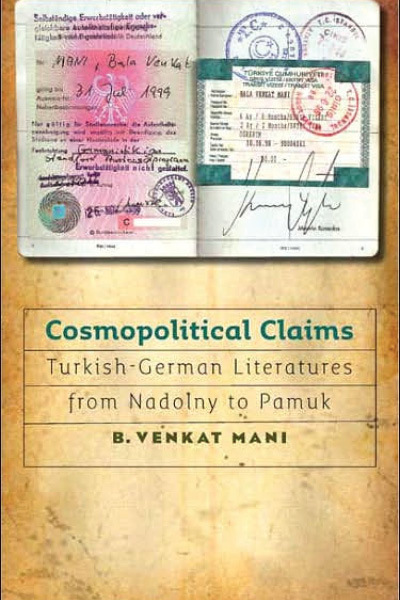 An illuminating and conceptually ambitious work, Mani’s Cosmopolitical Claims offers a wide-ranging, nuanced, and provocative analysis of concepts of multiculturalism, interculturalism, and the category of “minority” literature. An apparently “modest” project of literary history (as the author himself calls it), the book opens into a major engagement with an international set of theorists whose ideas are subjected to careful critique. It is an important book on an exceedingly important topic.

B. Venkat Mani is Associate Professor of German at UW- Madison and Faculty Affiliate of Global Studies, Center for European Studies, Center for South Asia and the DAAD Center for German and European Studies. He teaches nineteenth- through twenty-first-century German literature and culture, world literature, and seminars on theories of transnationalism, cosmopolitanism, and postcolonialism, among others. He is the author of Cosmopolitical Claims: Turkish-German Literatures from Nadolny to Pamuk (University of Iowa Press, 2007). He has published articles in journals such as Gegenwartsliteratur, German Quarterly, Monatshefte, Annual of Urdu Studies, and The Journal of Language, Identity, and Education. He has received grants from DAAD for the CGES research collaborative “Positioning ‘Modern’ Germany: Nationalism and Cosmopolitanism, Colonialism, Migration,” and from SSRC for the Global Studies project, “Inside Islam: Dialogue and Debate,” which funds a series of shows for Wisconsin Public Radio’s “Here on Earth.” Most recent awards at UW-Madison include a fellowship at the Institute for Research in the Humanities and the Letters and Science Hamel Family Research Award.

Mani leads the World Literatures Research Workshop at UW-Madison and is currently working on a book-length project, “Borrowing Privileges: World Literatures and Bibliomigrancy,” a study on comparative literature and world literature with a special focus on public and private libraries. Other projects include the translation, from German into English, of three essays by Hermann Hesse on the topic of World Literature; and a new Hindi translation of Bertolt Brecht’s Die Dreigroschenoper (The Threepenny Opera).