To view the past Nanovic Forums, visit the archive. 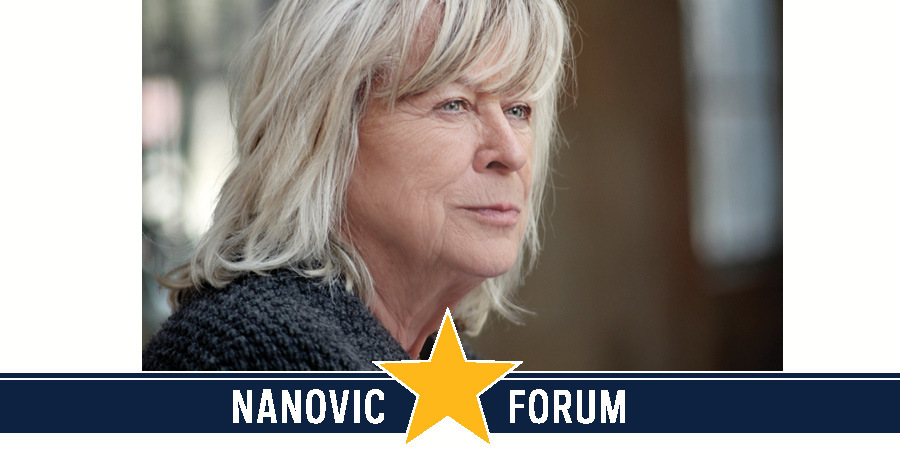 One of Germany’s best-known and most successful female directors, Margarethe von Trotta will join the Nanovic Forum as a distinguished guest in April. Highly acclaimed for her films about women and history, such as Rosa Luxemburg (1986), Vision (about Hildegard von Bingen) (2009) and Hannah Arendt (2013), Von Trotta will speak about film and history and hold a masterclass on her approach to film and biography.

She was born in Berlin in 1942. Her mother was from an aristocratic family that fled Russia after 1917. Her father was a painter. Von Trotta was therefore classified as a stateless non-citizen. She spent her youth in Dusseldorf and soon began an acting career in short film, television, and theatre in Paris of the 1960s, and then in Germany. She won acclaim for her roles in the“German New Wave” cinema and starred in films by Rainer Fassbinder and Volker Schlöndorff. She met the latter in 1969 and married him in 1971. Her directorial debut came in 1975 (The Lost Honor of Katharina Blum). The first feature-length film she wrote and directed herself was The Second Awakening of Christina Klages (1978). She went on to make important and controversial films, especially films about women, such as Marianne and Juliane (1981), Rosa Luxemburg (1986), Vision (2009), and Hannah Arendt (2013). The Misplaced World (2015) is her latest film.

Margarethe von Trotta currently lives in Paris. In addition to making films, she is a Professor of Film at the European Graduate School in Saas-Fee, Switzerland.

Ms. von Trotta will lead an open discussion on her work and techniques during this lunchtime masterclass.  Free and open to all, but registration is required by April 11th.

Register for the Masterclass

Participants are strongly encouraged to watch these films prior to the masterclass in order to participate fully in the discussion.

A visionary in every sense of the word, famed 12th-century Benedictine nun Hildegard von Bingen was determined to expand the responsibilities of women within her order. Lushly shot in original medieval cloisters of the fairytale-like German countryside, VISION is a profoundly inspirational portrait of a woman who has emerged from the shadows of history as a forward-thinking pioneer of faith.

An award-winning biopic of the influential German-Jewish philosopher and political theorist whose reporting on the 1961 trial of ex-Nazi Adolf Eichmann in The New Yorker—controversial both for her portrayal of Eichmann and the Jewish councils—introduced her now-famous concept of the “Banality of Evil.” Using footage from the actual Eichmann trial and weaving a narrative that spans three countries, von Trotta beautifully turns the often invisible passion for thought into immersive, dramatic cinema.

Rosa Luxemburg was a key figure in founding the German branch of the Communist party near the turn of the 19th to the 20th century. This well-wrought drama tells her story.

Available online through the Nanovic Institute.  You must send a request for access to view this film online.

The Nanovic Forum Lecture: “My Approach to Biography”

Hesburgh Center for International Studies Auditorium
Free and open to all.

Tickets $4-7 can be ordered at performingarts.nd.edu or at 574-631-2800.   A limited number of FREE TICKETS are available at the Nanovic Institute at 211 Brownson Hall.

Margarethe von Trotta will introduce her film and participate in a post-screening q&a session.

After lounge singer Sophie (Katja Riemann) loses her mother, her father (Matthias Habich) discovers that a New York-based opera singer, Caterina (Barbara Sukowa,) might be her identical twin. At his urging, Sophie travels to Manhattan to meet Caterina and unravel the family mystery. Long revered as one of Germany’s most distinguished talents, actress/filmmaker Margarethe von Trotta (Vision, Hannah Arendt) was inspired after her own late-in-life discovery of a half-sister.