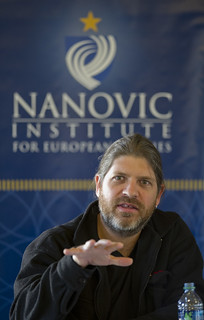 Before his evening concert at Legends of Notre Dame, French-born guitarist and composer Stéphane Wrembel delivers a lecture on "Impressionism in Music" at 3:30 p.m. in 215 Riley Hall of Art and Design.

Rolling Stone Magazine has called him “a revelation”. Woody Allen recruited him to score the theme for the smash film “Midnight in Paris”, and he performed the irresistibly catchy original song, “Bistro Fada”, live during the 2012 Academy Awards. He has headlined at Lincoln Center, played major festivals, recorded with mandolin legend David Grisman, toured with master violinist Mark O’Connor and shared stages with everyone from Elvis Costello to Patti Smith to The Roots. The Gitane guitar company has even named a model after him. To say that Stephane Wrembel— who learned his craft among the Gypsies at campsites in the French countryside— has already had a remarkable career would be an under-statement. This virtuoso guitarist from France has truly just begun to make his mark as one of the most original guitar voices in contemporary music.

This September, Wrembel delivered Dreamers of Dreams, his highly anticipated seventh studio album, recorded outside of New York City, where he has called home for over ten years. The album, which Wrembel recorded with his band—bassist Dave Speranza, rhythm guitarist Roy Williams, and drummer Nick Anderson—finds the multifaceted musician corralling a myriad of influences into a hybrid that simultaneously reflects where he has been, and points to where he is headed. Although he built his reputation as a stylist in the mode of the iconic French Sinti guitarist Django Reinhardt, Wrembel now revels in transcending and expanding. “I’m digging deeper and deeper into my roots,” he says about the album.

Born in Paris and raised in Fontainebleau, the home of Impressionism and Django, Wrembel first studied classical piano, at the age of four. “My teacher played with many renowned musicians,” he says. “She was very old school but she taught me how to interpret and how to make a phrase from beginning to end. My entire classical training from ages 4 to 16 was about how to interpret.” In his mid-teens, Wrembel discovered that he had an affinity for guitar. “I started practicing very intensely,” he says. “I was a big Pink Floyd fan; that remains my favorite music. I spent hours learning David Gilmour’s style. When I was 17, I decided to become a professional musician. I knew I had to practice 18 hours a day, and after I got my high school diploma I decided that was what I was going to do. I had a classical background, a passion for rock music, and then I found out about Django. I fell in love with the very strong impressionist feel in his music.”

To further his knowledge of music overall, and to gain experience, Wrembel immersed himself in the Gypsy culture. “When I first started going to the camps I learned that music is not only the notes,” he says. “There is an atmosphere to it. By going there I started learning the atmosphere of what it really means to play Sinti style guitar. In the camps you play all day long, nonstop. You don’t learn technical things. The culture doesn’t use names for things; they just practice melody. By playing and playing and playing you become entranced. The music just comes by itself.”

As he progressed as a player, Wrembel knew where he wanted to be in order to surround himself with expert, forward-thinking players. He enrolled in Boston’s prestigious Berklee College of Music in 2000, graduated summa cum laude two years later and moved to New York in 2003. Now the big question was how to make a living doing what he loved? “Most musicians arrive in New York and they look for a job to make money,” he says. “But then they don’t have time to practice and they have to depend on something external for money. I arrived with no money, and I said, ‘I have to find money right now. How do I do it?’ I called every single restaurant and club in New York. I went to each and every one with my rhythm player. We sat with the owners, talked, and played guitar. Then, we would get the gig.”

Before long, word of this remarkable European transplant began spreading among fellow musicians and denizens of the teeming New York music scene. Reviewing his 2002 debut album, Introducing Stephane Wrembel, Vintage Guitar magazine praised the recording as “pure dazzle and dash, a stunning storm of notes that blankets the melody in a rain of arpeggiated notes.” Gypsy Rumble, released in 2005, which includes David Grisman among its guests, and the following year’s Barbes-Brooklyn, also found favor with critics. Time Out New York wrote that the latter “shows off Wrembel’s limber chops in a variety of settings, including ebullient French Gypsy swing, moody ballads, sultry raga-influenced numbers and a lithe cover of Mongo Santamaria’s ‘Afro Blue.’” Woody Allen used one of the album’s tracks, “Big Brother,” in his 2008 film Vicky Cristina Barcelona. Wrembel’s fourth album, Terre Des Hommes, was released the same year. In addition to making a splash with his recordings, Wrembel has dazzled audiences at such major gatherings as the High Sierra Music Festival, the Berkshire Mountain Festival, Whistler International Music Festival and many others, as well as at Lincoln Center. He also created his own event, the annual Django A Go-Go Festival, where he and others influenced by Reinhardt celebrate the Sinti guitar style.

Although Wrembel certainly loves paying homage to his roots—hence the title of his fifth album Origins—and was happy to oblige when Allen’s producer requested “a work that would remind of the magic of Paris” for the Oscar-winning Midnight in Paris, he is in no way bound to his own past. Origins touched upon everything from blues to flamenco to rock; all of these influences came together as a genre identifiable only as Stephane Wrembel.

“I just play my own music,” he says. “I like to believe that it is beyond any one genre and that there is something in it for everyone. It’s not only for the rock music lover, or for the Django lover; it’s not only for the jazz lover.  It’s for the music lover.” Indeed, Dreamers of Dreams is the most sophisticated representation to date of Wrembel’s superior compositional skills. One can hear the echoes of his influences from Django Reinhardt to Pink Floyd. He harmoniously blends all his mastered techniques into one powerful, impressionist masterpiece.  Fleshed out by the superb musicians in his band, Wrembel’s melodies and beautifully framed song structures burst with panoply of textures, moods and emotions.   From the otherworldly, exotic opening track “Let There Be Light,” all the way through to the finale “Equinox,” Dreamers of Dreams takes the listener on an image-provoking journey into the world of dreams.

The Nanovic Institute for European Studies