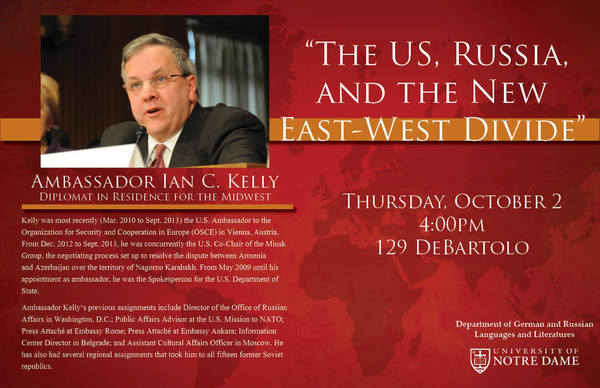 Ian C. Kelly is the Diplomat in Residence for the Midwest, based at the University of Illinois at Chicago. He was most recently (from March 2010 to September 2013) the U.S. Ambassador to the Organization for Security and Cooperation in Europe (OSCE), in Vienna, Austria. From December 2012 to September 2013, he was concurrently the U.S. Co-Chair of the Minsk Group, the negotiating process set up to resolve the dispute between Armenia and Azerbaijan over the territory of Nagorno Karabakh.

From May 2009 until his appointment as ambassador, he was the Spokesperson for the U.S. Department of State. Ambassador Kelly’s previous assignments include Director of the Office of Russian Affairs in Washington, D.C., Public Affairs Advisor at the U.S. Mission to NATO, Press Attaché at Embassy Rome, Press Attaché at Embassy Ankara, Information Center Director in Belgrade, and Assistant Cultural Affairs Officer in Moscow. He has also had several regional assignments that took him to all fifteen former Soviet republics.

He has studied Italian, Serbo-Croatian and Turkish at the National Foreign Affairs Training Center of the State Department. He also speaks Russian. Prior to joining the Foreign Service, Ambassador Kelly taught Russian at Columbia University, and received his doctorate there in Slavic Languages and Literatures in 1986. He also holds a B.A. from St. Olaf College and a M.A. from Northwestern University.

Sponsored by the Department of German and Russian Languages and Literatures.