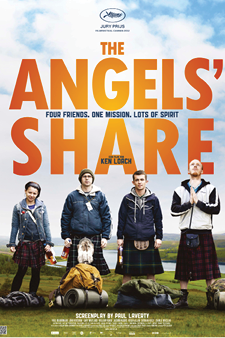 Winner of the 2012 Cannes Film Festival Jury Prize, “The Angels’ Share” is a comic fable about wasted talent and what happens when we are given a chance in life. It would be hard to see Robbie as a man worthy of redemption. He’s constantly watching out for a gang of thugs looking to settle a family grudge, his girlfriend is giving birth to a baby while her father offers him money to leave Glasgow, and he’s serving 300 hours of community service. But when Robbie meets Harry, the gruff but benevolent man in charge of his sentence, he finds a hidden talent for Scotch whiskey – and a new chance at life. For distillers the angels’ share is the whiskey lost to evaporation each year, and that little fact makes a rare cask of whiskey the perfect target for a heist. A hilarious story about second chances, THE ANGELS’ SHARE is tender crowd-pleaser from legendary filmmaker Ken Loach (“The Wind that Shakes the Barley”, “Kes”) and screenwriter Paul Laverty.

Part of the Nanovic Institute Film Series: Young and Broke in Europe

Introduced by Anthony Monta, associate director of the Nanovic Institute for European Studies

Tickets for all films are $7 general admission, $6 faculty/staff, $5 senior citizens, and $4 all students. To purchase tickets, contact the box office at 574-631-2800 or visit performingarts.nd.edu. A limited number of FREE tickets are available at the Nanovic Institute for Nanovic fellows and minors in the European studies program. Occasionally we have a few extra tickets to spare, so stop by and ask!