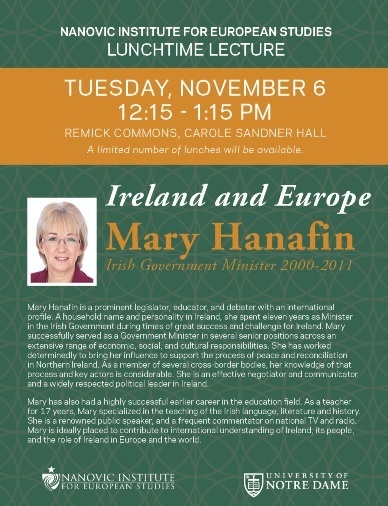 A limited number of lunches will be available.

Mary Hanafin is a prominent legislator, educator, and debater with an international profile. A household name and personality in Ireland, she spent eleven years as Minister
in the Irish Government during times of great success and challenge for Ireland. Mary successfully served as a Government Minister in several senior positions across an extensive range of economic, social, and cultural responsibilities. She has worked determinedly to bring her influence to support the process of peace and reconciliation in Northern Ireland. As a member of several cross-border bodies, her knowledge of that process and key actors is considerable. She is an effective negotiator and communicator and a widely respected political leader in Ireland.

Mary has also had a highly successful earlier career in the education field. As a teacher for 17 years, Mary specialized in the teaching of the Irish language, literature and history. She is a renowned public speaker, and a frequent commentator on national TV and radio. Mary is ideally placed to contribute to international understanding of Ireland, its people, and the role of Ireland in Europe and the world.