Mauro Magatti, professor of sociology at the Catholic University of Milan, Italy, will be giving a lunch time talk on Italy: The Failure of the “Second Republic” and the Difficult Path to the Future. 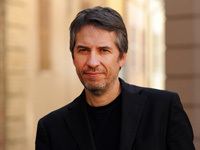