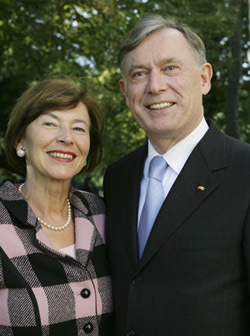 The Nanovic Institute for European Studies and the Notre Dame Institute for Advanced Study are pleased to welcome to the University of Notre Dame Dr. Horst Koehler, former President of the Federal Republic of Germany (2004-2010) and his wife, Mrs. Eva Luise Koehler. The Koehlers’ visit to the University will span three days and include a major public lecture by Dr. Koehler entitled “The Whole is at Stake” on Wednesday, September 28 at 7:00 p.m. in the Carey Auditorium in the Hesburgh Library. His lecture will focus on essential lessons to be learned from the international financial crisis with a particular emphasis on ethical questions and the German and European experiences. Dr. Koehler also served as Managing Director of the International Monetary Fund from 2000 to 2004. A public reception in the concourse of the Hesburgh Library will follow Dr. Koehler’s lecture.

In addition to his public lecture and several meetings with Notre Dame students and faculty, Dr. Koehler will offer an informal talk entitled “Understanding Africa: A View from Europe,” at 2:15 p.m. on Thursday, September 29 in the Auditorium of the Hesburgh Center for International Studies. This talk, organized by the Department of Africana Studies, the Africa Working Group of the Kellogg Institute for International Studies, and the Notre Dame Institute for Advanced Study, is based on Dr. Koehler’s experiences in key international positions and in public service working for improvements in Africa.

Mrs. Koehler, a tireless advocate for the study and understanding of rare diseases, will offer an informal talk, “Rare Diseases: A Challenge for our Societies,” to students and faculty of the University’s Center for Rare and Neglected Diseases on Friday, September 30. Mrs. Koehler’s talk is organized by the Center and the Notre Dame Institute for Advanced Study.

Dr. Horst Koehler was elected July 4, 2004 as the ninth president of the Federal Republic of Germany and served from 2004 to 2010. In 1990, prior to serving as president, Dr. Koehler was appointed state secretary. In this role, Dr. Koehler negotiated the German monetary union with the German Democratic Republic (GDR), also known as East Germany. As the German representative in Moscow, he negotiated the withdrawal of Soviet troops from the GDR, and later served as chief negotiator for the Maastricht Treaty on the European Monetary Union, and as the personal representative of Federal Chancellor Helmut Kohl for the World Economic Summits. In 1998, at the request of Chancellor Kohl, Dr. Koehler was named president of the European Bank for Reconstruction and Development in London, an institution charged with building up the market economy and democracy in the former Eastern Bloc states. In 2000, Federal Chancellor Gerhard Schröder named Dr. Koehler the new managing director of the International Monetary Fund (IMF) in Washington, D.C. In this role, Dr. Koehler’s goals were to make the IMF’s work transparent and to focus on crisis prevention. In increasing IMF cooperation with the World Bank, Dr. Koehler was convinced that more had to be done to alleviate poverty if peace and stability were to be secured and, to this end, he instigated far-reaching reforms in the IMF. As president of the German nation, Dr. Koehler worked to build a better national education system and to implement a creative approach to demographic change that would help to regenerate the nation. Believing Germany to be a “land of ideas” with the confidence and unity required to shape its own future, he proposed that the country shoulder its responsibility to be a force for good in the world, especially in the European Union. In the field of foreign policy, he advocated for a more humanistic dimension to globalization and clearly defined rules, campaigning staunchly in favor of poverty eradication and for improvements on the African continent. On May 23, 2009, President Koehler was re-elected for a second term of five years by an absolute majority of 613 votes in the Federal Convention during the first round of voting. On May 31, 2010, he resigned from the office of federal president.

Eva Luise Koehler is the former first lady of Germany and Patroness of the German Alliance for Rare Diseases (ACHSE), a position of leadership and service she has held since 2005. The ACHSE advocates on behalf of the needs and interests of rare disease patients; works to increase knowledge about rare diseases, especially among medical practitioners; supports the creation and development of cross-regional patient organizations; encourages information exchanges with specialists; develops cooperation between doctors, the pharmaceutical industry, and patient groups; and promotes increased research on orphan drugs. From 1969 to 1977 Mrs. Koehler taught at special schools for children and young people with learning difficulties in Winnenden and Herrenberg. She has also taught at primary schools in Bonn. Since 2005, Mrs. Koehler has also served as Patroness of Karlshöhe Ludwigsburg and as honorary chairwoman of the German Friends of Sheba Medical Center, Tel Hashomer.