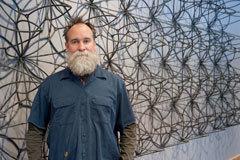 In conjunction with his exhibition: John Bisbee: Old and New Nails, Bowdoin College art instructor John Bisbee will talk about his works and the installation at the Snite Museum on Tuesday, February 15, 2011 at 6:30 pm.

This talk is free and open to the public.

The installation is generously sponsored by Mr. and Mrs. Robert S. Nanovic ’54.

John Bisbee has created a site-specific sculptural installation for the Mestrovic Studio Gallery. It features two, new, large wall reliefs, Floresco, 2011 and Clematis, 2011, meant to evoke stained glass windows as well as some smaller wall pieces and a free-standing “spool” composed of nails created during the last few years.

Typical of Bisbee’s life-long oeuvre, the sculptures are fabricated solely from nails. Commenting on his passion for this banal material, Portland Museum of Art (Maine) Curator Susan Danly observed:

For the past 20 years, John Bisbee has been building inventive and complex sculptures from just one type of ordinary object—the bright common nail or spike. He has welded, cut, hammered, forged, spliced, and bent all sizes of nails from tiny brads to 12-inch spikes…His sculpture derives its fascination from the contradiction between the ordinariness of materials and the cleverness of their transformation. Some of the titles that he gives his sculptures suggest actual objects–purse, spool, cocoon, husk, lattice–or simple shapes–square, arc, plume, sphere–but of late these representative forms have given way to more abstract constructions that are elaborations on the nail itself…His simple nails have become beautiful, intricate, and emblematic.

John Bisbee (American, born 1965) is a Maine sculptor who has spent decades exploring the artistic possibilities of nails. He creates sculptures of various sizes and forms using metal nails that range in size from brads to railroad spikes and in color from silver to rust.

Bisbee is an art department faculty member at Bowdoin College in Brunswick, Maine. He received his B.F.A. from Alfred University in 1990 and in 1992 attended the Skowhegan School of Painting and Sculpture, Skowhegan, Maine. Solo museum exhibitions of Bisbee’s work have been installed in the Albright-Knox Art Gallery in Buffalo, New York, and the Kemper Museum of Contemporary Art in Kansas City, Missouri. In 2008, a mid-career retrospective was exhibited in the Portland Museum of Art, Portland, Maine.