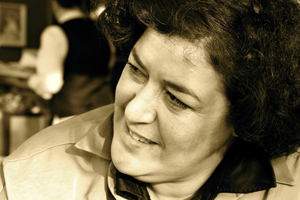 Zahia Rahmani was born in 1962 in Algeria, to a Berber family, just after the end of the Algerian War. Her fiction explores the painful experience of growing up in France as the daughter of a harki- one of the Algerians who fought for the French during the war. In Paris, she studied art history devoted to modern and contemporary art and after obtaining a Master of Robert Rauschenberg, she studied aesthetics. Rahmani has worked in various major places of contemporary art such as Leo Castelli in New York, such as the Galerie Nationale du Jeu de Paume, the Ecole Nationale Superieure des Beaux-Arts in Nice, Villa Arson and École Nationale Supérieure des Beaux – Arts in Paris. Currently, she is in charge of mission at the Institut national d’histoire de l’art.