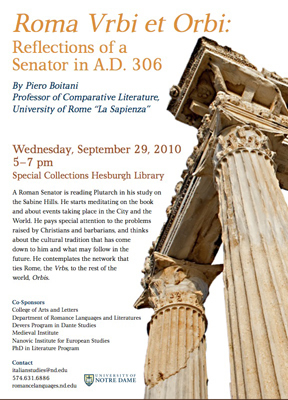 A Roman Senator is reading Plutarch in his study on the Sabine Hills. He starts meditating on the book and about events taking place in the City and the World. He pays special attention to the problems raised by Christians and barbarians, and thinks about the cultural tradition that has come down to him and what may follow in the future. He contemplates the network that ties Rome, the _Vrb_s, to the rest of the world, Orbis.