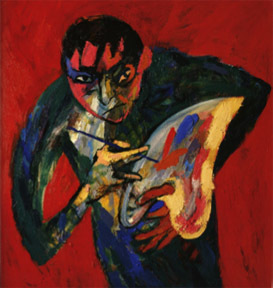 Acclaimed Russian artist, novelist, and essayist Maxim Kantor will be on campus for a series of lectures and workshops January 26 – 28.

Wednesday, January 27, 2010 4:15 p.m.
“Russian Intelligentsia as a Motor and Victim of Changes in the Country”
Andrews Auditorium, Geddes Hall

A graduate of the Moscow Art Polygraph Institute, in 1983 Kantor organized the independent group of painters known as Krasny Dom (Red House), a group that sponsored exhibitions of the Moscow underground without official permission. An artist of international acclaim, Kantor’s work has been featured in galleries and museums worldwide including the Studio Marconi in Milan, the Eva Poll Gallery in Berlin, the State Pushkin Museum in Russia, the Staedel Museum in Frankfurt, the Bass Museum of Art in Miami Beach, the Musee d’Histoire de la Ville de Luxembourg, the State Primorsky Museum of Art in Vladivostok, the Togliatti Museum of Fine Art, the Samara Art Museum in Russia, and the University of Notre Dame’s Snite Museum of Art.

A talented novelist and essayist, Kantor is the author of House in No-Man’s Land (1993), the two-volume novel, Drawing Textbook, for which he won the Russian National Literature Award in 2006. His writing includes a collection of satirical plays entitled _Party with Baboon _(2007), and the essay collection, Democracy Slow Jaws (2008), which focuses on the evolution and historical ideals of democracy, imperialism, human rights, totalitarianism, “democratic war,” and the development of democratic society. In 2009, Kantor published the novel A Contre-Pied in which he confronted the discrediting of liberal doctrine. His last novel V tou storonou examines the current financial crisis. Presently, Kantor is a Member of Senior Room at Pembroke College, an Oxford Artist in Residence and Visiting Fellow at St. Antony College, and a Member of the Common Room at Wolfson College, Oxford.

For more information, go to sri.nd.edu/institute-for-advanced-study/programs

Sponsored by the Notre Dame Institute for Advanced Study, the Nanovic Institute for European Studies, the Snite Museum of Art, and the Department of German and Russian Languages and Literatures.