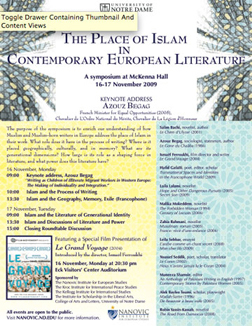 The purpose of this symposium is to enrich our understanding of contemporary European literature by addressing how Muslim and Muslim-born writers address the place of Islam in their work. Thematically, we will use the word “place” in reference to its different meanings: location, role, status, etc. Where do writers place Islam geographically, spatially, and in memory? What role do its concepts and cultural practices play in literature? How large is its role as a shaping force in literature, and what power does this literature have?

In focusing on these literary themes at the conference, we seek to move beyond the hot-button controversies and turn our attention to categories that transcend them. We will begin our discussions with individual literary processes; then we will turn to the unique contexts of individual writers, raise questions about generational dynamics and identities, and finally reflect on the largest questions about the power of literature itself, and its relationship to other powers. The symposium will be structured around four panels, which we will use to pose questions of individual participants and then promote group discussion.

Keynote address, panel sessions, and film are free and open to the public.
Download the flier

“Writing as Children of Illiterate Migrant Workers in Western Europe: the Making of Individuality and Integration”

Books by the above authors will be available for purchase at McKenna Hall both days of the symposium.

For more information on this conference, please email Dr. Anthony Monta, Assistant Director of the Nanovic Institute for European Studies.