The Center Cannot Hold: The Movement of Ideas Between Imperial Centers and Peripheries

If there any additional questions about schedule or registration, please contact ndconf09@gmail.com.

Turning and turning in the widening gyre
The falcon cannot hear the falconer;
Things fall apart; the centre cannot hold;
Mere anarchy is loosed upon the world,
The blood-dimmed tide is loosed, and everywhere
The ceremony of innocence is drowned;
The best lack all conviction, while the worst
Are full of passionate intensity. 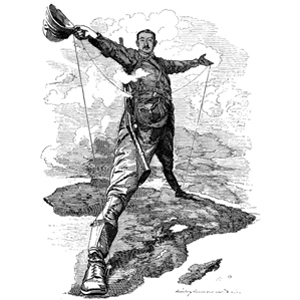 W. B. Yeats’s apocalyptic poem, “The Second Coming,” portrays an unsettled world in which empires war against each other, or dissolve, while revolutions threaten from within. It might well depict our own world, shaped as it is by social and intellectual competition, misunderstanding, and (often enough) conflict.

How might scholars address such instability? This conference represents one possible answer: it explores problems that arise when goods and ideas move from “centers” of power (e.g., empires, elites, or authors) to “the peripheries” (e.g., colonies, popular audiences, or readers), especially within the context of European empires. Historically, the movement of ideas and commodities never took place along a “one-way street” proceeding neatly from the center outward. Nor did those on the edges always receive things exactly as the center intended. In fact, they often fought against “foreign” impositions by rejecting them wholesale or modifying them to fit their own needs or worldviews. In the process, those on the peripheries frequently exerted a degree of influence on the culture of the imperial center. Through this conference, graduate students will explore these kinds of cross-cultural exchange in politics, philosophy, economics, science, religion and literature.

The conference will take place on the Notre Dame campus over three days, with the opening plenary address on Sunday evening and sessions on Monday and Tuesday. Sessions will consist of panels of three 20-minute presentations. Please make plans to join us!

“Centers” and “Peripheries” in Interdisciplinary Perspective

This conference will bring together graduate students working in a variety of disciplines; it will reflect on how interactions between centers and peripheries affect the people and ideas of the cultures involved, especially in the context of empire, but in other more localized contexts as well. The center-periphery scheme, broadly defined, applies to many fields of inquiry. Intellectual historians and historians of print culture can use it to explore the movement of ideas between knowledge producers and knowledge consumers. Social and cultural historians use it to understand how “advanced” societies, through trade and colonialism, interact with the economies, politics, and religions of “less developed” societies. Economists use this approach to understand international trade patterns, specialization patterns, and exchange rates, and even to argue that places on the peripheries would do well to industrialize. Philosophers use a variation of the center-peripheries scheme to consider relationships between the colonizer and colonized, while theologians use it to grasp how shifting demographic patterns inform the shape of religious thought. Literary historians use the scheme to explain how texts are formed through a combination of external and local influences. American Studies scholars use it to argue for a “middle ground” in which people construct their own categories of meaning. Other uses of the scheme abound: interaction between centers and peripheries – as well as their sometimes unexpected cultural consequences – can be explored in myriad ways. Can the centers hold? Can the peripheries?
This conference seeks to inform and enrich ongoing center-periphery debates in fields such as philosophy, theology, political science, economics, sociology, anthropology, and history. With this in mind, we encourage the submission of all papers that explore the meanings, manifestations and implications of “centers” or “peripheries.” The conference is not restricted by field: any interested graduate student or advanced undergraduate student may participate.

Sponsored by the Nanovic Institute for European Studies with support from the Graduate School and the Kellogg Institute for International Studies.