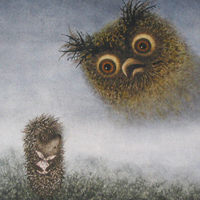 Accolades such as ‘the greatest of all time’ are often suspect as they generally represent the narrow concerns and values of the moment the judgement is made, but when in 1984 a group of animators in Los Angeles voted Yuri Norstein’s Tale of Tales (1979) the all-time greatest animation film, they clearly reflected the esteem in which this Russian animator was and continues to be held by the animation community. Tale of Tales is deeply rooted in Russian history, myth and sensibility. It combines memories of childhood and war, and contrasts the romantic past with the threadbare present. The events throughout are observed by a little wolf, a figure common in Russian folklore, though in this case without the usual menacing overtones. Not only does the film have various layers of meaning, it is also complex in how it was made, with Norstein using paper cut-outs and drawings on different levels of glass under the rostrum camera.

Clare Kitson scheduled animation programmes at the Los Angeles County Museum of Art in the early 70s and was a programmer at the National Film Theatre in the 80s. From 1989 to 1999 she commissioned animation for Britain’s famous Channel 4. Her highly-praised book Yuri Norstein and Tale of Tales: An animator’s journey (John Libbey Publishing) appeared in 2005. Clare Kitson’s latest book, British animation: The Channel 4 factor is soon to be published by Parliament Hill Publishing.